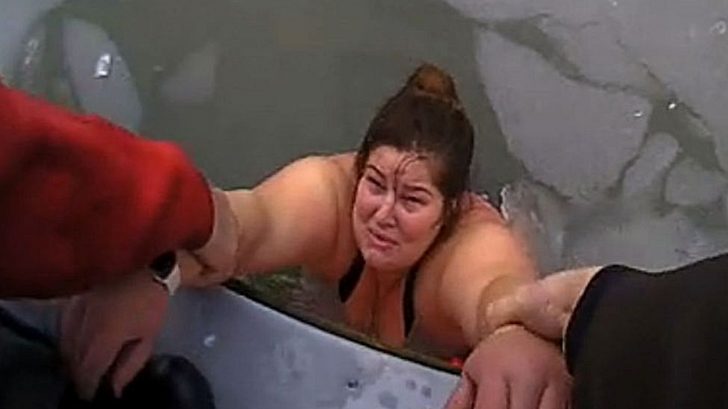 Macomb County Sheriff’s Office released some dramatic footage on Facebook that was captured by a police officer’s bodycam of a woman being pulled out of icy water in Harrison Township, Michigan.

The video starts off with the officer in his car pulling up to the scene. As he parks the car a woman runs up to him who is a friend of the girl who fell in the water and started letting the officer know where to go. Apparently the girls were fishing when one of them slipped on the dock and fell into the water.

She immediately started screaming because the water was around 36 degrees and two other fishermen ran over to help her. Unfortunately, her body was quickly going numb and the two fishermen were unable to pull her onto the dock again so they called the police. The police arrived within 15 minutes of her falling in and one of them ran over to her grabbing her hand.

The officer then instructed everyone to clear the dock so the Fire Department could get through and escort her to the hospital. The Facebook post said the lady is doing better and she identified herself as Korisa Miller to ABC Detroit affiliate WXYZ.

You can watch the dramatic footage in the video below.

On 1/27/20 at 3:20pm, this young lady was fishing off of docks in Harrison Township. As she attempted to stand up, she lost her footing and slipped off the dock into the freezing water. The young lady’s friend was a dock over and heard her fall; she looked over to see her friend struggling in the icy waters. Her friend was unable to pull her up to the dock and the young lady’s body began to go numb. Two nearby fisherman heard the women’s cries and came over to help. The two fisherman attempted to pull the woman up onto the dock but struggled as the young lady’s body had become completely numb and she was unable to move. Her friend called for help as the fisherman held on to the young lady keeping her from slipping underwater and surely drowning. The Macomb County Sheriff’s Office along with the Harrison Fire Department arrived on scene and were able to pull the young lady from the 36 degree water. She was believed to be in the water for approximately 15 minutes.The young lady is doing better today but wants to remind people to always fish with a partner and make sure you have proper, non-slip, footwear when you walking on any slippery surface. She is forever grateful to her friend and the fisherman that saved her life. We thank them as well. What you need to know if you happen to fall into cold water. • Don't panic. Try to get control of your breathing. Hold onto something or stay as still as possible until your breathing settles down. It may be a boat, a fixed object, or something floating. Focus on floating with your head above water until the cold shock response abates.• If multiple people fall into cold water, huddling in a group lessens the loss of body heat and is good for morale. Also, rescuers can spot a group more easily than individuals.• If you were not wearing a PFD when you entered the water, look to see if one is floating around you and put it on immediately. Don't take your clothes off unless absolutely necessary. A layer of water trapped inside your clothing will help insulate you.• Get as much of your body out of the water as possible. Even though you may feel colder out of the water, the rate of heat loss will be slower than if immersed in water.• If you cannot get out of the water quickly, act to protect against rapid heat loss. In as little as 10 minutes, you may be unable to self-rescue. Your focus now should be to slow heat loss.o Safety typically looks closer than it actually is, so staying with the boat is usually a better choice than swimming.o Adopt a position to reduce heat loss. If alone, use the HELP (Heat Escape Lessening Posture) position; or if there are others in the water with you, huddle together. The HELP position looks similar to the fetal position.o If you must swim, conserve energy and minimize movement. Swim on your back with your upper arms against the sides of your chest, your thighs together, and your knees bent. Flutter-kick with your lower legs.• Be prepared at all times to signal rescuers.• Seek medical help immediately.For more information on cold water safety please out https://www.boat-ed.com/