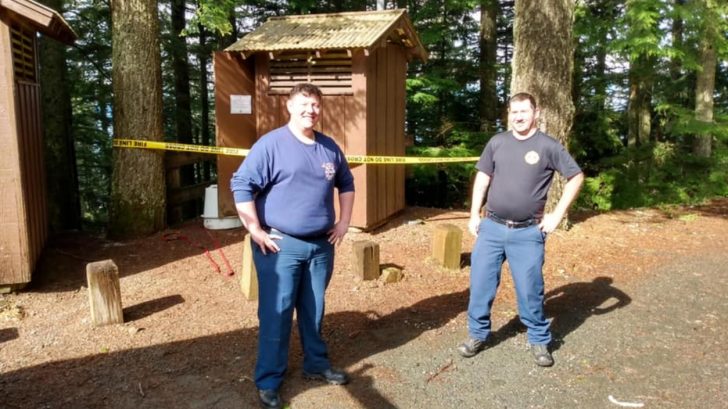 The Brinnon Fire Department announced last week that they rescued a woman in Washington state after she fell headfirst into an outhouse toilet and got stuck trying to reach her phone that she dropped.

The department said the incident happened in the Olympic National Forest in northwest Washington while the woman was hiking on Mt. Walker and stopped to take a restroom break.

She was all alone, except for her dog who was with her and so she disassembled the toilet seat and tried to use the dog leash to lower down into the toilet and get her device.

According to Brinnon Fire Department Chief Tim Manly, she couldn’t get her phone with the leash so she then tied the leash to herself and went in headfirst to reach for her device.

For 10-15 minutes, she tried to get herself out with no luck. Fortunately, her phone was still working, so she dialed 911 and was able to get help sent out to her location.

“The crews made a makeshift cribbing platform by passing them down to the patient,” the Brinnon Fire Department wrote on Facebook. “After making it tall enough for her to stand on, the crew pulled the victim to safety.”

After pulling her out, they washed her down with a water hose and she was given a Tyvek suit to change into. The department encouraged her to seek medical attention after being exposed to human waste but she declined their suggestion.

“The Brinnon department reported that the woman said she was uninjured and requested no medical transport,” according to Kitsap Sun.

“The patient was extremely fortunate not to be overcome by toxic gases or sustain injury,” the fire department said in their statement.

The woman thanked the firefighters before getting into her car and driving back to her home in California. Chief Manly said that in all the decades he’s been working as a firefighter, he has never seen anything like it.

See The Departments Full Statement Below