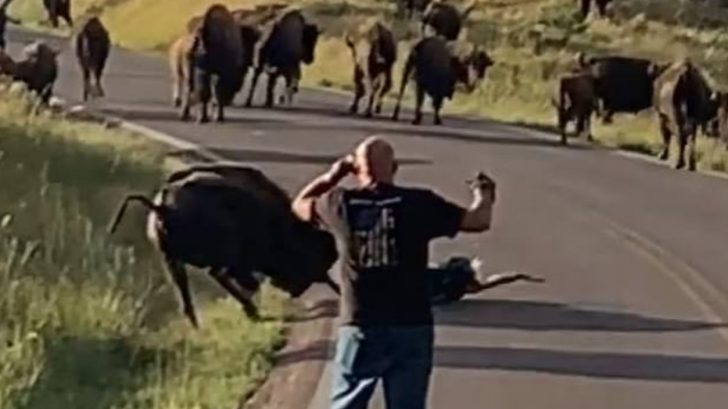 The dramatic incident happened at Custer State Park in South Dakota when bikers were gathered for the 2020 Sturgis Motorcycle Rally.

Officials said that 250,000 people showed up to the festival which took place on August 12th, 2020. The festival lasts for 10 days and was expected to become one of the largest public events since the beginning of the pandemic. The Custer County Sheriff, Marty Mechaley, made a special warning though:

“We would like to remind everyone to not pet the fluffy cows – also known as Bison/Buffalo. We have had calls about the fluffy cows blocking the road occasionally – some people are also getting too close.” Marty said to Dailymail UK.“Remember this is their park and we are the guests….please give them a break and keep your distance.”

Though the Sheriff’s warning was quite serious, a 54-year-old woman riding a motorcycle didn’t follow the advice when she saw a herd of bison crossing the road. She stepped away from her motorcycle and walked too close to a bison calf to take a picture. Unfortunately, she didn’t anticipate the reaction of the mother bison who came charging straight at her.

The bison dragged her around in a very violent way. She easily flipped the lady on the ground and because one of the bison’s horns got caught on her belt, she flung her all over the road, leaving the poor woman without pants and completely unconscious.

The victim had to be airlifted to the nearest hospital due to her extensive injuries. According to the Custer County Sheriff, the victim’s pants got ripped off of her which helped her avoid serious long term injuries.

That being said, the Sheriff reminded the public again about the safety rules: stay in your vehicles when you see a herd of bison and keep a safe distance from them.

Woman Tries Bison Selfie, Gets Knocked Out & Loses Her Pants

How many more Bison stories do we have to cover before people QUIT TRYING TO GET PICTURES WITH A BISON?!?!?