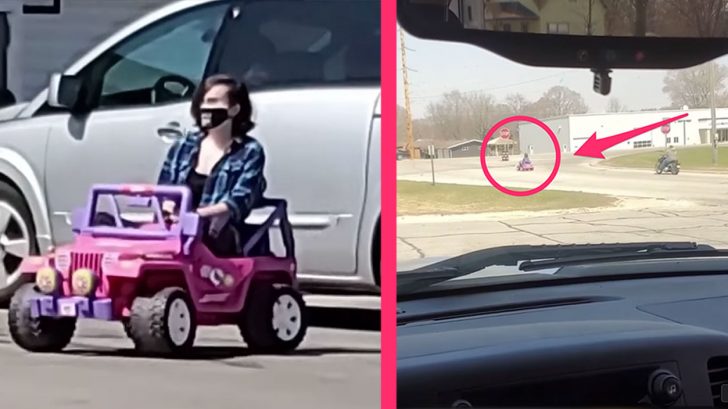 A video that’s been circulating the internet shows a woman doing a beer run, but instead of hopping into an actual vehicle to drive home, her method of transportation is none other than a Power Wheels Barbie Jeep.

The video captures her walking out of a convenience store wearing pajama bottoms and a sweater. With three bottles of booze under her arm, she casually loads them up the back of the toy jeep and hops inside.

Slamming the Barbie Jeep into reverse, she backs out of the parking spot.

The video then cuts to her driving away on the actual road with oncoming traffic.

Regardless of whatever modifications one does, none of these Power Wheels versions are fit for the road. It is unclear where the video was taken, however one Texas license plate appears in the video.

This isn’t the first time something of this nature has happened. Back in 2019, a man was spotted doing the same funny, yet dangerous activity in Philidelphia during rush-hour traffic.

And it doesn’t stop there. Some people take their toy jeeps to the next level by racing them downhill. Watch the compilation video below of some of the most extreme clips of Power Wheels racing downhill.