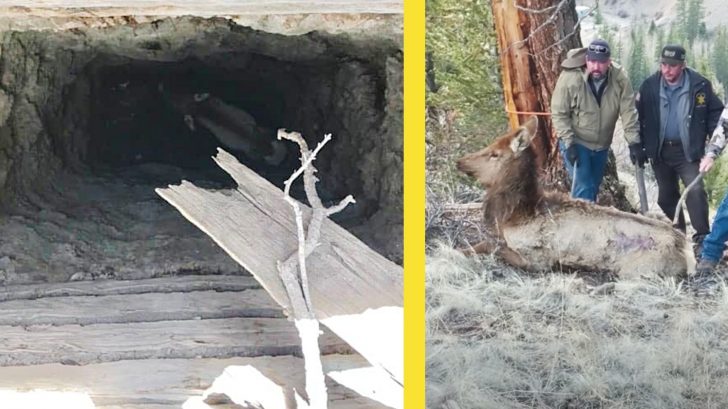 One unlucky elk found herself in quite a pickle after stumbling upon an old abandoned mine shaft just outside of Creede, Colorado – a rural area in the southwestern part of the state.

A local woman who has lived in Creede for more than three decades, Chere Waters, was out walking and enjoying the beautiful scenery of Colorado when she came across this troubled cow elk in a very dire predicament.

As described by her daughter Hanna on Facebook, Chere Waters normally would take one of her favorite trails, but on April 18th, 2020, the weather was not great and she had second thoughts about even going on a walk – but she decided to go anyway, however, and brought a friend.

“We know that there are all sorts of interesting things to be found in the woods of Creede,” Hanna wrote on Facebook. “Old mineshafts, like sinkholes, plunge into the earth without warning and one must careful going off the beaten path, lest you find yourself however-many-feet-down. Off of this rarely taken path of hers, Mama knew of an old mine shaft such as this. Today she felt she needed to take a look in the shaft. “

It was at this point that Chere discovered a cow elk had fallen into one of the old mine shafts, and miraculously, was still alive.

According to a news article by the Denver Post, Chere and her friend felt the need to look into the mine shaft, so she belly-crawled up to the edge and peeked in.

“So I looked in and see this animal in there,” Waters told the publication. “I was so surprised, I couldn’t believe it.”

Her next move was to call the authorities from the Colorado Parks & Wildlife Department. Officers arrived a while later and investigated the situation even more.

“When I got the call I was told that a deer was stuck in a hole,” Officer Brent Woodward said. “But they thought the shaft was only about 10-feet deep. When I got there I could see it was an elk and it was probably 30-feet down.”

The officers tranquilized the animal and lowered a worker into the shaft to assist in securing the elk with straps so that they could lift it out using a winch. Once the elk was ground-side again, the officers examined her to make sure she had no life-threatening injuries.

Luckily enough, the damage from the fall appeared to just be scrapes and bruises, so the officers gave her a shot to counteract the sedative. She regained consciousness and stood up, fully able to walk, and then darted off into the forest.

“When she stood up, she moved a few yards, turned and looked at us for a few seconds and then turned and trotted away. It was great that we could get her out alive,” Officer Woodward added.

The woman who discovered the elk says that she was urged to check out the shaft for a reason. “I was just so called to go to that place.”

Read all about Chere Water’s encounter with this elk as described by her daughter below and check out the local news coverage, too.

A Sunday Story, from my home ♥️On Saturday, my mama, Chere Waters, went into the woods like she does everyday. She has…