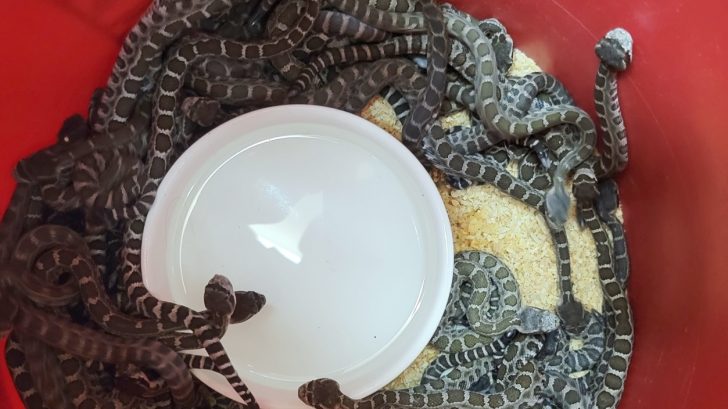 Sonoma County Reptile Rescue, a non-profit rescue and sanctuary based in Sebastopol, California shared photos of nearly 100 snakes that were pulled from underneath a woman’s home.

The Santa Rosa resident said that she had a suspicion there were snakes living under her home, so she called the Reptile Rescue center near them who came out to her home to assess the situation.

When they got there, snake handlers found and captured dozens of snakes within the first four hours. They shared photos of what they caught and one photo showed nearly a couple of dozen adult Northern Pacific Rattlers piled together in a tub.

Northern Pacific Rattlers are considered to be one of the most deadly snakes in Northern California and when the Reptile Rescue was finished with searching for them, the final count came to 22 adults and 59 babies.

Reptile Rescue said they will be going back several more times to search for more of them and will remove them from the property if they find them. Another picture was shared of a big red bucket with a water bowl in it and at the bottom of the bucket, it was just crawling with baby rattlers.

The homeowner was so glad to have the venomous snakes removed and said she can sleep more peacefully knowing they are gone. Fortunately, no one was hurt or bitten during the process, including the rattlesnakes.