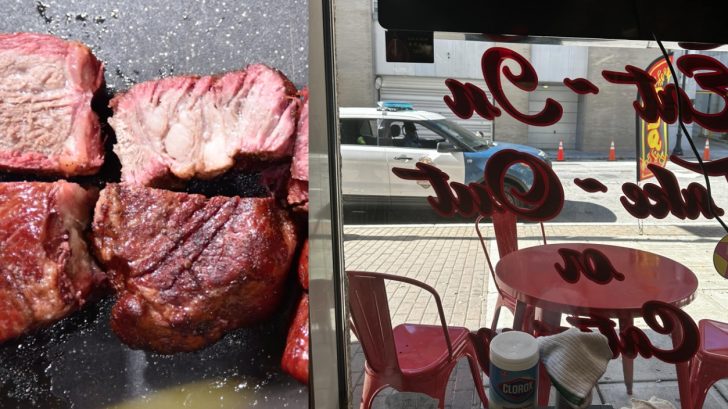 Clyde Cooper’s BBQ restaurant in downtown Raleigh, North Carolina, said that a woman called the police on them after she received smoked pork that was “very pink.”

A photo shared on Clyde Cooper’s BBQ’s Facebook page shows a police officer’s vehicle parked outside of the restaurant along with two other photos showing where the woman left a bad review and the restaurant owner responding to it.

After receiving her order, the woman marched back into the establishment mad and upset at her meal and the owner and employees tried their best to explain to her that meat turns pink when it is smoked, adding that even if they were to cook it longer, it would still stay pink.

The woman unwilling to accept that smoked barbecue stays pink, still continued to complain and so, the owner of the restaurant gave her free chicken and told her she can just keep the smoked barbecue.

The woman then angrily left, called the police, and then got online to write a bad review about the restaurant. Clyde Cooper’s BBQ shared two screenshots on their Facebook page showing what the woman wrote and how the owner responded.

Here’s what and exactly how, Annie Cook, wrote her bad review: “Worst customer service I ever had in my life. Barbecue was very pink and had lots of fat in it..Tried to go back and tell them I either won’t my money back or something else they refused to do either. After I call the COPS up there. They gave me 1 piece of chicken in a bag and said keep the plate .Cops said I had to file a civil suit with the courts.Worst food ever chesse not even melted on Mac and cheese.”

Clyde Cooper’s BBQ owner, Debbie Holt, responded back to the review saying this: “It’s extremely laughable (and sad) you think this is an issue to call the cops over. You took a cops time, that may have been needed to be on an IMPORTANT call, to complain because the bbq was smoked (pink). Furthermore, you were given chicken to replace your bbq and told you could keep the perfectly good bbq you thought was raw because you are so ignorant to the fact that bbq turns pink when smoked and you wouldn’t listen to us trying to explain that to you. You were given that chicken before you left, and then you called the cops. Sad. Sad sad sad”

The restaurant located in downtown Raleigh, North Carolina has been operational since 1938 and has over 420 reviews with a 4.3 out of 5-star rating. This means that the majority of people who ate there and left a review were very satisfied with their meals.

Debbie told WRAL, “When the cop came in though, he had a cute little smile on his face and rolled his eyes and just had his arms folded. I don’t think he even said much to me except, ‘I got you.’”

Debbie went on to add that many of her customers specifically come to the restaurant to ask for the “infamous pink bbq.” After the incident, however, the restaurant says they plan to create “Pink BBQ” merchandise and says the woman can come back anytime she likes.

Debbie told WRAL, “Tell her to come back and I’ll educate her about North Carolina, southeastern-style barbecue. I’d be happy to.”