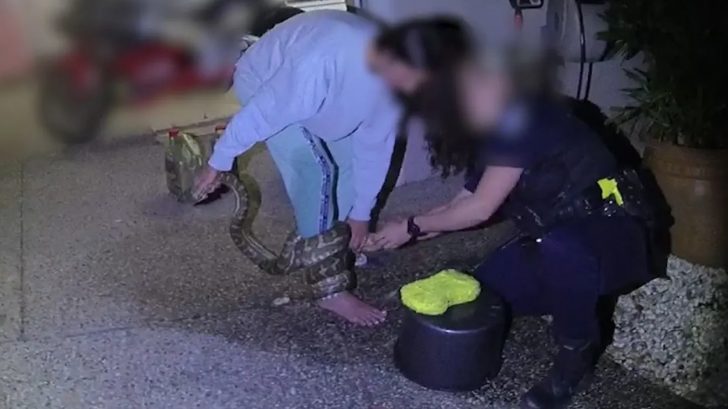 On October 15th, 2020, the Queensland Police released bodycam footage that an officer captured of a wild carpet python and a homeowner in Samford Valley, Australia.

The incident was originally captured on October 6th, 2020, and showed two Ferny Grove Police officers helping untangle a python that had wrapped around a woman’s leg. The woman told police that she was working in her garage that evening when she noticed her cat cornering the wild snake under her car.

The woman owned and handled pet snakes herself so she decided to rescue it from her cat, but as she did, the snake quickly coiled around her leg. It began to constrict tighter and tighter until the woman was forced to call emergency services for help.

One of the officers helped unwrapped the snake from around the woman’s leg while she safely held onto its head. “You’re in a bit of a pickle,” the officer said. “He’s not happy,” another officer added. “It’s the most interesting job we’ve had all day.”

What was funny is, at the time, the police didn’t know the snake was a wild snake and when they got it off her leg they asked her if she wanted some help getting it back in its pen. The woman responded with, “He’s not mine, he’s wild,” and started walking over to a nearby bush to free it. The officers were shocked that it was not her pet and followed her with the camera as she released it.

On a *scale* of no worries to HELL NO, which would you be in this sssscenario? ? pic.twitter.com/QVw01MTngL