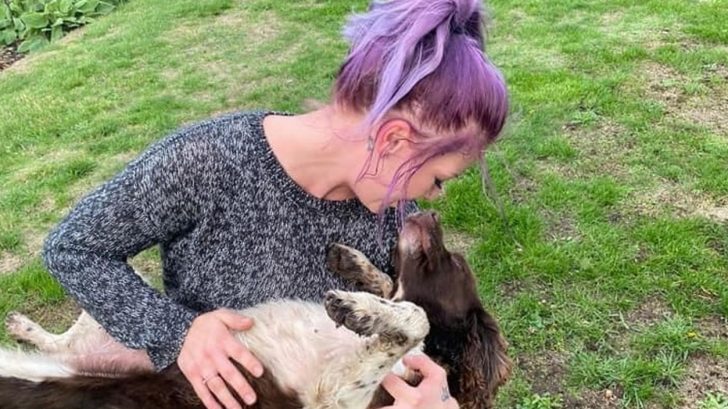 26-year-old Codie Hutton said she had her pet Springer Spaniel, Maisie, in the car with her on Saturday, November 5, near Woodbridge, Suffolk when the dog was spooked by fireworks and jumped out of the vehicle.

For two long days, she frantically looked for Maisie while asking people to help her and even camped out in a field where the dog had been spotted but was never able to find her.

She was then told that someone found her pet’s body flattened by a car on a nearby road.

Devastated, Codie took the flattened dog to the vet to scan it for Maisie’s microchip to confirm her identity, however, the vet was not able to find the microchip.

According to Mirror, Codie said, “Just like that, she was gone. It was my worst nightmare. We were convinced from the tail and markings on the legs that it was her.”

She then broke the news to her son Taylen, “I told Taylen she was a star in doggy heaven now. It was devastating.”

Codie and the family ended up burying the dog in her backyard with Maisie’s bed and a photo of the pet with her young son.

The next day Codie started receiving phone calls from friends and locals saying that her nine-year-old Maisie was still alive and spotted about seven miles away in Otley, Suffolk from where she ran off.

On the Tuesday morning, November 8, Maisie was supposedly spotted again and Codie said, “I thought this was someone else’s dog and that Maisie was still buried.”

She decided to go out regardless and continue searching for her since someone claimed they spotted her and on Thursday morning a woman managed to take a photo of Maisie providing evidence that she was still alive.

At that point, family, friends, and strangers who had been following Maisie’s story on social media joined in on the search near Wickham Market, Suffolk to find her.

About 20 people were all working together to search for Maisie and someone finally spotted her running into a driveway where she was cornered. The person then called the family to inform them that they had her locked in where she was.

Codie’s dad drove out to the location in Wickham Market, Suffolk, picked her up, and brought her home and was waiting in the backyard garden for Codie when she showed up and saw them sitting there.

Codie said, “She was passed to me and was crying with excitement. It’s been a rollercoaster. I will never forget it, that’s for sure. I thought she was gone. I thought I was never going to see her again. I still couldn’t believe it was my Maisie.”

Maisie was tired and hungry but overall, remained relatively unharmed after being lost for five days on her own. She covered more than 17 miles with people sighting her in Melton, Bredfield, Helmingham, and Wickham Market.

Codie also learned that the “dog” she buried in her backyard was actually a fox.

Since the whole ordeal, Codie says she is now trying to raise £600 for Finding Ipswich Dogs Organisation (FIDO) which is an organization that has helped find over 2,000 lost dogs.

Codie said, “A lady called Sam French who runs FIDO was with us every step of the way setting food traps, four-foot bulletin signs and cameras at every sighting. I’d like to say a big, huge thank you from myself, my family and, of course, from Maisie.”

For those who would like to donate and help Codie raise money to find more lost dogs, they can take a look at her GoFundMe page.