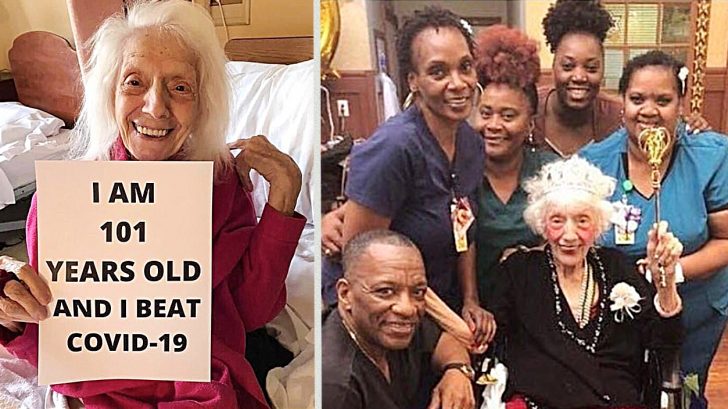 A 101-year-old woman named Angelina Friedman from Westchester County, New York made it through the Spanish Flu in 1918 and also beat COVID-19 after being diagnosed with it on March 21st, 2020.

Her daughter, Joanne Merola, tells the story of her grandmother dying in 1918 as she was giving birth to her mom on a passenger ship that was fleeing from Italy to New York during the Spanish Flu pandemic.

Her mother made it to America and went on to overcome many obstacles in life, like cancer, miscarriages, and even outlived her husband and 10 other siblings. Her family is calling her superhuman for her ability to overcome so many challenges in her life.

Joanne Merola told Pix11, “Everybody in the family lived until at least 95, except one uncle. My mother is a survivor. She is not human. She has superhuman DNA.”

Angelina Friedman, 101, whose mother died giving birth to her on a ship from Italy to NYC during the Spanish flu pandemic BEATS coronavirus…Post via @dailymail ..#RhythmEntertainment #RhythmFm #Fighter

Angelina was taken to the hospital on March 21st to undergo a minor medical procedure, but after testing positive for COVID-19 they decided to postpone the procedure. She spent a week in the hospital then returned to her nursing home to self-isolate in her room.

She had a fever that came and went over the next few weeks but on April 20th a nurse tested her again and delightfully told her that the results came back negative. The nurse reached out to Joanne to her the good news. They all agreed it was pretty amazing to witness a woman born during a worldwide pandemic survive another one over 100 years later.