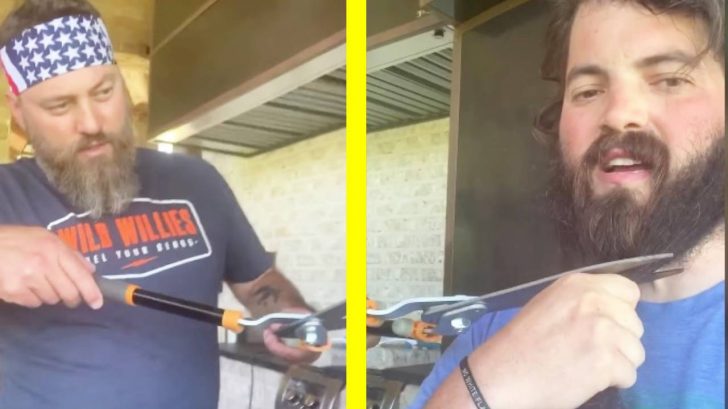 In late 2020, Duck Dynasty star Willie Robertson shocked his family by cutting his signature long hair without telling any of them.

After the big cut was made, he went around town surprising his family including his wife, daughters Bella and Sadie, son Rowdy, and his mom, who we know as Miss Kay.

The person who filmed it all was Willie’s assistant, John David, who also goes by the name “Johnny D.” John David also happens to be Korie’s cousin and has made several appearances on Duck Dynasty.

Now that Willie’s hair has been cut, he thinks it’s time John David cuts his as well. But Willie cut John David’s beard, instead of going to a professional barber like he did. The video starts showing off just how unkempt John David’s hair and beard has gotten.

Then, Willie tried to cut the beard with garden shears, but was unsuccessful. He tried with kitchen shears and then finally had success with regular office scissors. He took another tool to it before using an electric shaver to shape John David’s beard.

The end result wasn’t too bad! John David may not even need to go to a barber to touch it up!