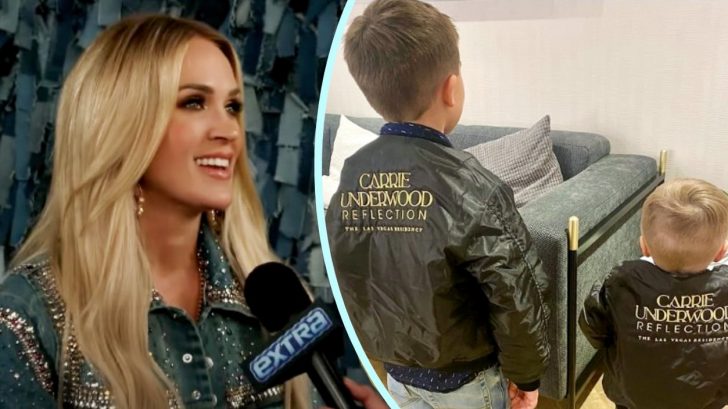 Earlier this year, Carrie Underwood performed a run of shows for her Reflection residency in Las Vegas. He sons, Isaiah (age seven) and Jacob (age three) watched some of her shows. They were her biggest fans!

In May, Carrie shared the cutest photo of her sons rocking Reflection jackets backstage at one of her shows.

Carrie’s residency is done for the year, and will resume in 2023. But she still has lots of shows on the books!

In October, Carrie will embark on the Denim & Rhinestones Tour in support of her new album of the same name. The tour runs through March 2023 and will take Carrie to dozens of cities across the United States. Jimmie Allen will be joining her as the special guest on the tour.

Carrie’s sons have gone on tour with her in the past. So will they be tagging along for the Denim & Rhinestones Tour?

She answered that question during an interview with Extra TV while CMA Fest was going going on in Nashville:

“This tour I think for the most part they’ll be home,” she said. “The last tour we set up like a playroom in the venues that had you know, crayons, and paint, and some toys, and things like that, that they could kind of go have their own little space to get away. But my last tour my youngest son was three months old when we went on the road. So he was just a little nugget, you know?”

The Denim & Rhinestones Tour does include a show in Nashville next year. So maybe Carrie’s sons will at least attend that show!

You can watch Carrie’s full interview in the clip below. She talks more about her album, her tour, and what she’s been up to at CMA Fest so far.