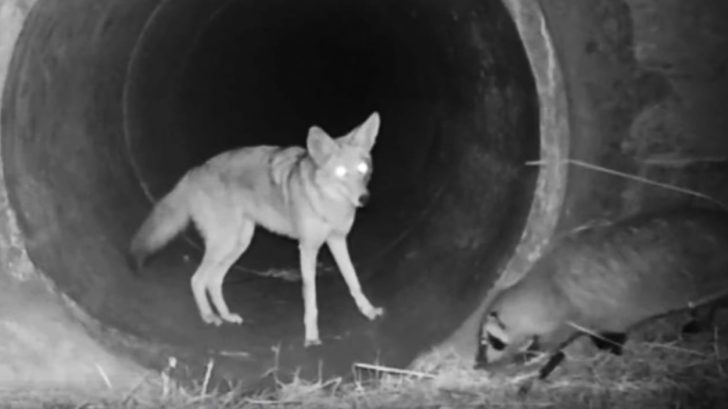 Wildlife cameras set up by the Peninsula Open Space Trust (POST) and Pathways for Wildlife caught an extraordinary interaction between two animals. The clip of their discovery was posted online, and has since gone viral.

So what is so remarkable about this footage? It shows two seemingly unlikely friends traveling together under a highway in the Santa Cruz Mountains. And those two unlikely friends were a coyote and a badger.

Neal Sharma, the leader of the researchers who set up the cameras, spoke about the special relationship that coyotes and badgers share. As he explained, the two critters will sometimes band together and hunt as a team:

“They both like to eat ground squirrels. So if a badger is flushing out a den, digging things up, a coyote is waiting nearby in case a squirrel runs out of a different entrance,” Sharma told The Dodo. “So it’s mutually beneficial.”

While its unclear if the coyote and badger filmed by the POST cameras were a hunting pair, they seemed to share a friendly relationship. The video shows the coyote leaping into a play bow before the badger comes into view.

Then, the badger quickly follows the coyote through the tunnel under the California highway:

“They came through from one side of the highway, spent some time and went back through from the way they came,” Sharma said. “So definitely a relationship here, and just some amazing body language. This is about as good as it gets.”

I’m choosing to believe that the coyote sounds like Michael J. Fox and the badger sounds like Sam Elliot and they’re best friends on an adventure. https://t.co/oqVCEb37VY

As mentioned earlier, POST shared a short clip of the coyote and badger’s travels on its social media pages. In the video’s caption on Facebook, POST explained this was “the first time this type of behavior has been captured in the San Francisco Bay Area.”

“Scientists have found both species benefit by hunting together,” the caption read.

At the time of this writing, the video POST shared has generated nearly three million views on Facebook an thousands more on Instagram. People are amazed to see the friendly bond this coyote and the badger share.

You too, can check out their interaction by watching the video below. We’d like to think these two buddies are still traveling together to this day!

? Our wildlife cameras spotted this coyote and badger traveling together through a culvert (tunnel) under a highway in the South Bay. We believe this is the first observation of its kind documenting these two together. Studies have shown that a badger and coyote hunting together can be beneficial for both species, as they pursue favorite prey such as ground squirrels. Maybe that's where they're headed? See what else our wildlife cameras have spotted with the link in our profile or at openspacetrust.org/blog/wildlife. Video: @peninsulaopenspacetrust / @pathways_for_wildlife . . . #Coyote #Badger #Wildlife #BayAreaWildlife #WildlifeCameras #WidlifeMovement #CuteAnimals #Animals #CoyoteAndBadger