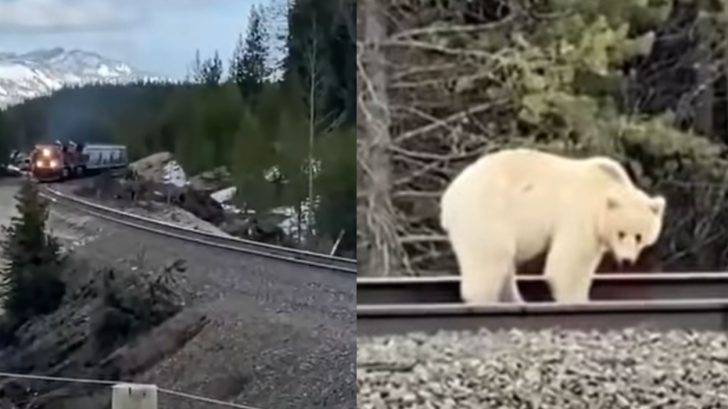 TJ Cambell shared a video on YouTube showing footage that he captured of a wild white grizzly bear almost getting hit by a train in Canada. “We were lucky enough to spot this rare white grizzly on our road trip,” he wrote on his channel.

“And before you comment and say its a Polar bear or a Spirit bear or a Grolar bear, please do some research as it is not any of them. It is in fact a blonde or white grizzly bear,” he added.

In the video, you can see that TJ was filming from a parked vehicle that had pulled over to the side of the road near the train tracks. When they first spotted the bear, they noticed it was eating something it found in the middle of the railroad tracks and that’s the reason it was there.

As they filmed the bear eating, they panned the camera around and you could see that there was a train down the tracks chugging along and it was coming in the bear’s direction. TJ and a lady in the vehicle yelled at the bear in an attempt to get it away from the railroad tracks.

“The train is coming,” the lady watching commentated.

“Come on, get off there! Get going! Hey!” TJ yelled at the bear.

At this point, the train was barreling down the tracks and getting closer by the second. The lady in the car said “oh my God,” in fear that she was about to witness the bear getting hit by the train.

The train’s conductor eventually blew the horn to get the bear’s attention which worked and it turned around to look up at the train. Fortunately, the bear got the hint and took off running into the nearby woods. The video was posted back in May of 2020 and since then has received more than 6 million views on YouTube.