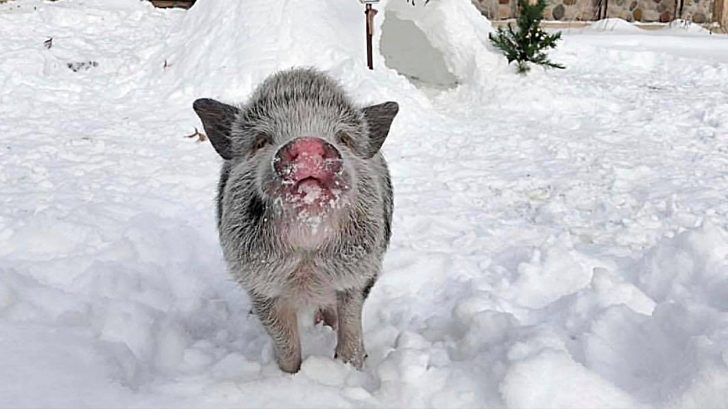 Wild Pigs in Canada have been spotted building their own “pigloos” this winter to keep warm and survive being spotted by hunters. With the snow piled high, they use their snout to dig a tunnel in the snow creating a perfect igloo.

? Feral pigs are causing issues in Canada and the USA. The wild pigs have become one of Canada's most recent, invasive species. How are they surviving winter? By creating what has been dubbed "pigloos," which copy the effect of igloos. ⠀⠀⠀⠀⠀⠀⠀⠀⠀ University officials are saying that their presence is an ecological disaster that is already underway. What to do about this?

Wild Pigs Are An Invasive Species

They are considered an invasive species to Canada because they ruin farmers’ crops, they poop in the water, contaminating it, and are very dangerous to run into if you are hiking in the wild. In fact, one woman was killed not too long ago when she got out of her car to go to work and some wild pigs ambushed her.

Canadian authorities are fighting to keep the population numbers under control and these pigloos are not helping because they not only keep them warm in the winter but they shield the pigs from being spotted by helicopters searching for them. Plus the average mother pig gives birth to about six babies.

“The growing wild pig population is not an ecological disaster waiting to happen,” Ryan Brook, a researcher for the Canadian Wild Pig Project told USask News, “it is already happening.”

They are even starting to cross over into the United States too and giving farmers in Montana & North Dakota a hard time. According to the US Department of Agriculture, wild pigs do about 1.5 to 2.5 billion dollars worth of damage per year.

Have you seen a better pigloo?! Noble at @everbrookefarms is one happy snow pig! Is there any room for us in there?