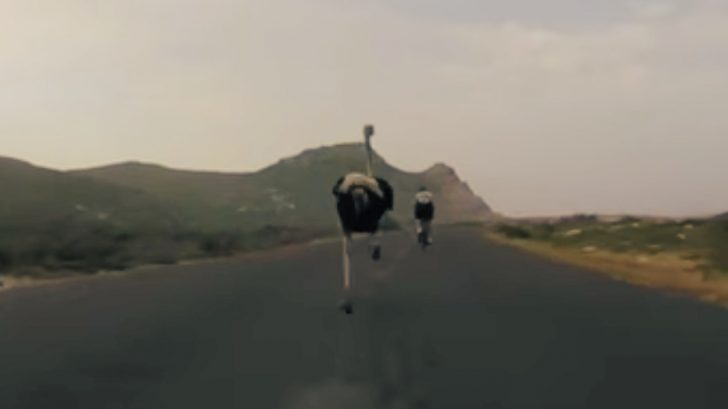 Oleksiy Mishchenko was cycling in South Africa with some friends before the Cape Argus Bike Tour in 2016 when he filmed an ostrich joining them on the ride. At the time, they were doing a 31-mile pre-race before the main event and were on their way to the Cape of Good Hope.

“Suddenly, I spotted a white ostrich on my left, then this beast jumped on the road from the right and started chasing my friends!” Oleksiy wrote on YouTube. “It was a little scary at first, but then I thought I [was] gonna fell of [sic] my bike from laughter.”

The ostrich chased them for a full minute as Oleksiy filmed with his helmet cam. The ostrich was keeping up with them very well until it eventually decided to detour off the road and stop following the cyclist.

“Luckily the creature decided to leave us alone, as we were running out of road. The Cape of Good hope is a dead end way.” Oleksiy added.

It was a beautiful ride beside the ocean and nobody was hurt during the encounter. Oleksiy posted the video on YouTube and since then it has been viewed more than 14.9 million times.

The last thing that Oleksiy has to say about it was, “My guess he wanted to show off in front of his girlfriend, I bet she was very impressed!”

Watch Ostrich Chase Cyclist In The Video Below