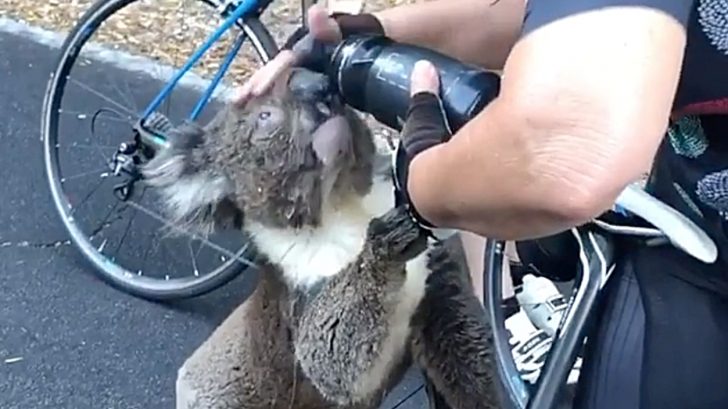 While bike riding in the hills of Adelaida, South Australia last Thursday (Dec 26th), Anna Heusler and her bicyclist friends spotted a wild koala sitting in the middle of the road.

They stopped to shoo it off the road so that it wouldn’t get hit by cars speeding around the corner, but the koala did something nobody really expected. It walked right up to Anna and climbed onto her bike.

She said she’d never seen one move that fast before, nor be so friendly. Most of the time wild koala’s run from and avoid people. However, the temperature was around 107 degrees Fahrenheit and the poor thing looked thirsty, so Anna offered up her water bottle.

Anna told 7 News Australia, “As I was giving him a drink from our water bottles, he climbed up into my bike. I’ve never seen a koala move this quickly. They’re usually not people animals, they stay up on the trees and people admire them from afar,”

According to the outlet, the koala drank all of Anna and her partner’s water and then they safely moved it off of the road. Unfortunately, koalas have had it bad lately in New South Wales Australia with wildfires killing off 30% of the entire population. Anna hopes her video going viral raising awareness for the koalas and they get the support they need during this critical time.