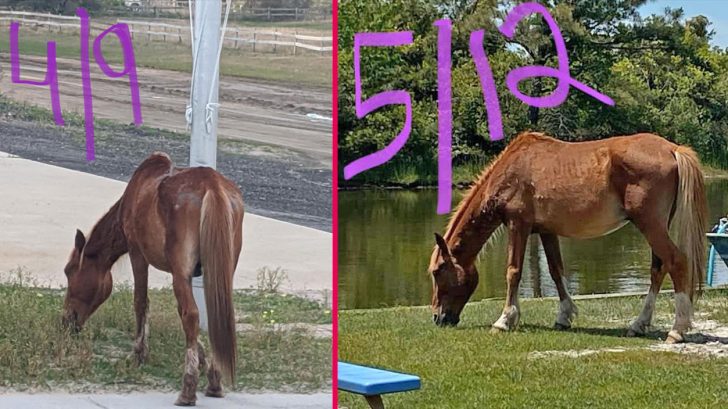 The Outer Banks is a 130-mile stretch of barrier islands of the coast North Carolina and is home to Corolla wild horses. They are a feral breed that dates back 500 years ago in the days of Spanish exploration. These majestic animals that roam the land are a protected species.

Topnotch is one of about 100 corolla horses that roam wild in the outer banks. He is an older stallion that has long been a local favorite. Recently, a younger stallion has been attempting to take Topnotch’s mares and after several battles for dominance, combined with the stress of constantly defending himself, Topnotch became very sickly and ventured near death. Pictures of him in early April reveal his ribs showing and patches of bare skin exposed due to hair loss. It was clear that he lost the fight for his mares and shortly after he disappeared into the marsh where people assumed he passed away in peace.

On May 12, 2020, Topnotch was spotted grazing and appeared to be in much better health. The Corolla Wild Horse Fund is a nonprofit organization that monitors these animals. They have been following Topnotch’s condition and wrote on Facebook,

“He disappeared into the marsh and were worried he’d passed away, but lo and behold, he was spotted today looking wonderful! He’s probably gained about 150lbs and his skin condition seems to have cleared up. He’s still alone, but such is life for an old stallion.”

One of the vets that work for the nonprofit was able to assess the old stallion and assures that he is in much better health and will continue to be monitored throughout the summer.

Watch the video below for more fascinating facts about the wild horses that roam the Outer Banks.