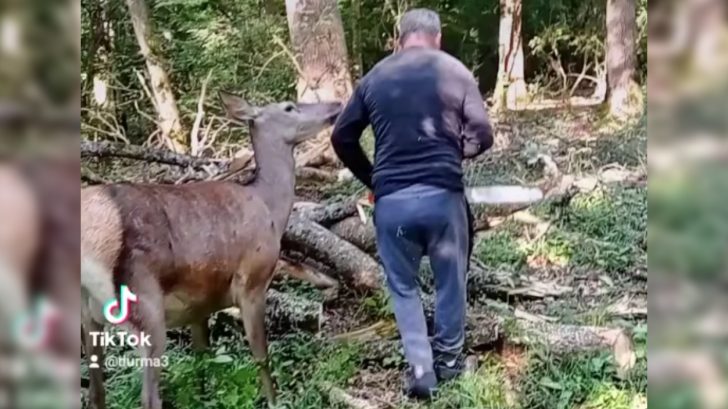 A video on TikTok has been going viral over the weekend after Marko Durmisi filmed the funny moment a very curious wild deer was watching a man chop up a tree with a chainsaw.

Storyful, who also reshared the video to YouTube, said the footage was taken in a forest in Croatia on May 21 (2022) near the town of Donji Miholjac.

Since the video was posted, it’s gathered more than 9.3 million views and you can see why. The deer appeared to be oddly enamored by the trees getting slit open in front of it and walked right up behind the man while he was cutting with the chainsaw.

The woodcutter said told Storyful that “the deer approached them when they went to cut wood. He said that they fed the deer, and the next morning it met them again.”

At one point, the deer even laid on the ground right in front of the woodcutter to get a better view of the action. The man periodically turned around to pet the deer that was clearly getting all up in his personal space.

You gotta admit though, it was probably mind-blowing to a deer that’s been in the woods all its life to see a tree get sliced open so easily.

Watch Footage Of The Deer Below