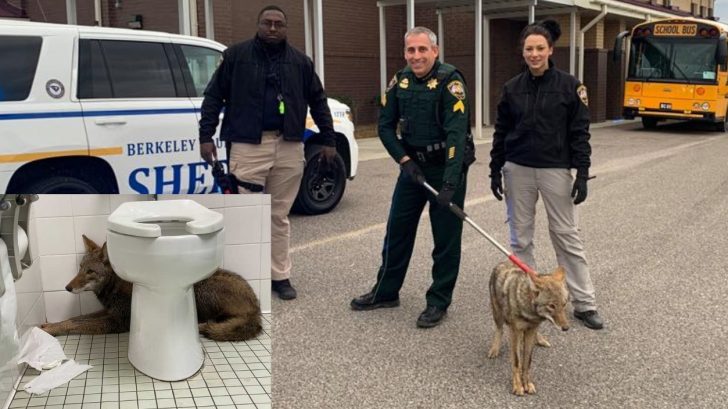 Berkeley County Sheriff’s Office in Summerville, South Carolina got a call about a coyote sneaking into Cane Bay Elementary School, so they sent some officers to go investigate.

It was during drop-off time so kids were rolling in through the doors and the coyote must have snuck in through one of the open doors. When officers arrived on the scene, the coyote had hunkered down in one of the bathrooms.

Using a catching-pole and great team work, the officers were able to capture the animal and remove it from the building. Cane Bay Cat, Berkeley County Sheriff’s Office Community Action Team, gave the coyote the nickname Wiley and joked that Wiley was the new mascot of the school.

Once officers safely had the coyote outside, they took a picture with him before placing Wiley into an animal cage in the back of a police truck. He was directly transported to the Department of Natural Resources to be held.

“Rest assured, Wiley was safely apprehended and turned over to the custody of the South Carolina Department of Natural Resources, unharmed,” Cane Bay Cat wrote on Facebook.

Fortunately, the students, the staff, the officers, and coyote were all fine and no one was injured during the incident. Everyone’s just thankful everything went smooth and Wiley can safely be relocated back into the wilderness.