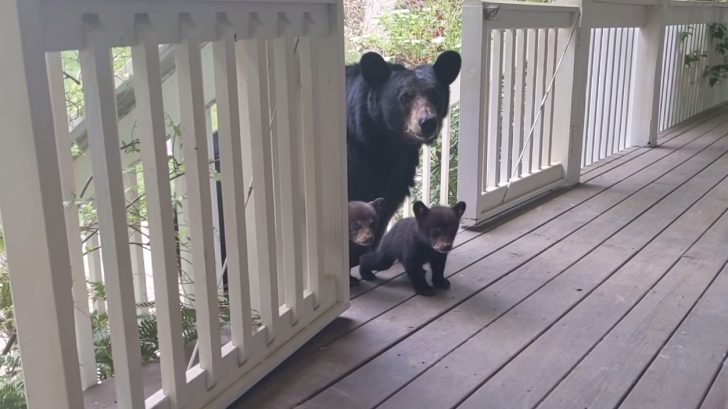 Patrick Conley lives in Asheville, North Carolina, and has grown a YouTube channel with thousands of followers because of his home videos of bears and other wildlife that visit his property.

Over the years, he has watched many bears journey across his land but around late 2017, he began noticing a family of bears that were visiting on a regular basis. Over time, the bears had become friendly with him and he took many videos of them, sharing them on his YouTube channel.

Patrick recently shared a video of a mother bear he named Simone that he watched grow from a small cub to an adult. Simone came to visit him for the first time in a while and this time she did not come alone, she brought her newly born cubs with her.

WARNING: Never approach a wild mother bear and her cubs, it could be very dangerous.

The video showed Simone standing in Patrick’s front yard while he was filming her from the porch. Clearly trying to introduce her new babies to him, she looked at him and then looked back towards the forest giving her cubs a signal to come running towards her.

The cubs ran out of the forest and caught up with their mother who had begun walking towards the steps of the porch and making her way up. The cubs followed behind her and Patrick filmed them as she came to the top of the steps and looked at him.

She was cute, but the most adorable moment was when her little bear cubs got to the top of the steps and did the same thing.

They all sniffed around the front porch before walking back into the yard. The bear cubs played around climbing a tree for a few more minutes before running back off into the woods. You can see the footage below.

Watch The Wild Bear Footage Below