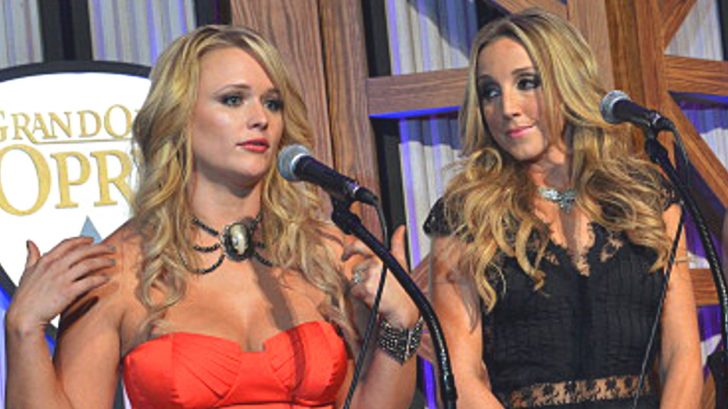 Miranda Lambert and her Pistol Annies bandmate Ashley Monroe go way back. As Monroe explained in a recent interview with The Boot, she has been performing with Lambert since she was 17 years old.

To put things in perspective, Monroe is now 31.

Even after all this time, Monroe continues to be in awe of her best friend and her incredible talents as a singer, songwriter, and performer:

“You know, she’s such a real person. You forget sometimes that she’s who she is. Even when I stand sidestage to her at concerts…I’ll just be standing by her, grinning ear to ear, and step back and look at the crowd. She’s something special.“

Lambert’s special talents were recognized during the ACM Awards on Sunday night. She took home two awards, the first for Song of the Year for “Tin Man” and the second for Female Vocalist of the year, her ninth consecutive win in that category.

After Lambert won the Song of the Year award, show host Reba McEntire announced some big news. In winning that award, Lambert had eclipsed the previous record set by Brooks & Dunn for the most ACM wins by an artist.

As both the performer and a co-writer of “Tin Man,” Lambert won two trophies for Song of the Year. By the time she won her Female Vocalist award later in the night, her total number of ACM trophies rose to 32.

Monroe, who was watching for home, admits that she was in tears watching her best friend rake up all of those awards.

“I bawled [on Sunday] night, watching her at the ACMs,” she said. “I’m very proud of her. That’s for sure.”

Monroe added that she, Lambert, and Pistol Annies bandmate Angaleena Presley are all in a group text, and they both congratulated her on her success.

Some ACM wins could be in Monroe’s future as well, since the Pistol Annies are gearing up to put together a new project. Monroe dished a few details about that, saying that they’ve been writing and plan to get into the studio pretty soon.

“We went to Miranda’s farm last week and really hunkered down and got some good stuff,” she said.

Based on how good the Annies’ first two records were, we can’t wait to hear what they craft for their third! Enjoy watching them perform one of their biggest hits, “Hell on Heels,” in the video below.

Lambert is so lucky to have a loving and supportive friend like Monroe!