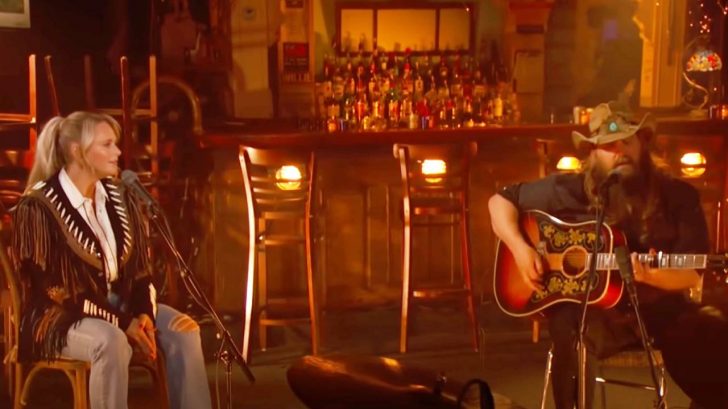 The 56th Annual ACM Awards aired on Sunday, April 18th and it was jam-packed with over 25 performances.

One of those performances came from Chris Stapleton, who ended up taking home Album of the Year later in the night for Starting Over.

Stapleton performed his heart-tugging song off of the album titled “Maggie’s Song,” which is a tribute to his dog, Maggie. After the performance, he shared a photo of his inspiration on social media.

Stapleton performed “Maggie’s Song” from the historic Bluebird Cafe in downtown Nashville, but was joined by a surprise background vocalist, who is normally his wife, Morgane. Instead, he performed with Miranda Lambert on television for the first time ever.

Fans were confused because Morgane usually sings backup for her husband, but due to a prior commitment, she was unable to perform.

In an official statement to media outlets, the Academy of Country Music said, “Due to her prior doula commitment, Morgane Stapleton is unable to join Chris Stapleton at the Bluebird as scheduled. Miranda Lambert will instead take the Bluebird stage with Chris tonight for ‘Maggie’s Song.‘”

Stapleton thanked Lambert and the ACM Awards after the performance.

Thank you to @mirandalambert & all my friends at the #ACMAwards