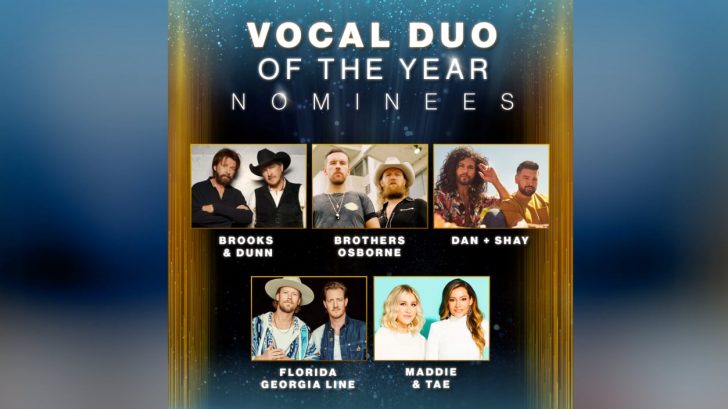 The CMA’s Vocal Duo of the Year award was first presented during its 1970 awards ceremony. The award went to Dolly Parton and Porter Wagoner that year and the next.

In the decades that have passed since then, artists such as Conway Twitty and Loretta Lynn, The Judds, and Florida Georgia Line have taken home the trophy. The record for the most wins in the category is held by Brooks & Dunn, with 14 total wins.

Moving in to the 2021 CMA Awards, Brooks & Dunn were up for the award yet again. All of the nominees were:

So did Dan + Shay claim the trophy for a third year in a row? Or did it go to another duo? Keep reading to find out the answers to those questions.

The 2021 CMA Awards were held on Wednesday, November 10 and aired on ABC. That’s when country fans found out who won the Vocal Duo of the Year award.

And the winners were…Brothers Osborne!

Your #CMAawards Vocal Duo of the Year is…@BrothersOsborne! Congratulations!?? pic.twitter.com/O19jvg0SgJ

It’s no wonder why Brothers Osborne won this award! Their album, Skeletons, which was released in late 2020, reached the fourth spot on the Country Albums chart in the U.S. They also scored a Top 50 hit with their 2021 single, “I’m Not For Everyone.” Not to mention all of the epic performances they’ve put on in the past year (including at the CMA Summer Jam).

This is the fourth time Brothers Osborne have won this award. Congratulations to them on their big win!

Watch one of their newest music videos below.