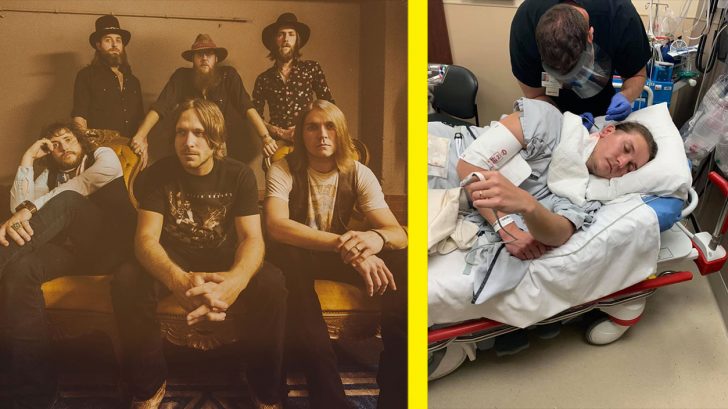 John Jeffers, vocalist and guitar player for Whiskey Myers was injured in an accident while riding an ATV on Sunday, Oct. 11, 2020. Jeffers suffered a skull fracture, when a bolt went through his skull, narrowly missing his carotid artery.

His wife, Hope Petty Jeffers gave an update on her Facebook page and asked for prayer for her husband.

“He had an ATV accident Sunday. He has a skull fracture + total hearing loss in one ear, but we were reassured by the neurosurgeon + ENT at Medical City that both will heal + he will hear again. He is pretty banged up, with lots of stitches to his head + knee. They believe a bolt went through his skull + barely missed his carotid artery. ? He is at high risk of infection due the location of his fracture so specific prayers that he stays infection free.”

Hope also shared a picture of him being treated and thanked her parents for waiting with her in the Emergency Room.

Jeffers was released from the hospital on Monday, October 12, 2020, and is currently recovering at home.

The couple is due to have their baby, Jag Wilder in just six weeks.

We may have a future rock star ⚡️Jag Wilder threw us a ??during hims ultrasound today ? Officially in our 3rd trimester today + he says, let’s rock + roll, mama ✨

Our thoughts and prayers are with John and his wife at this time, and we wish him a speedy recovery.