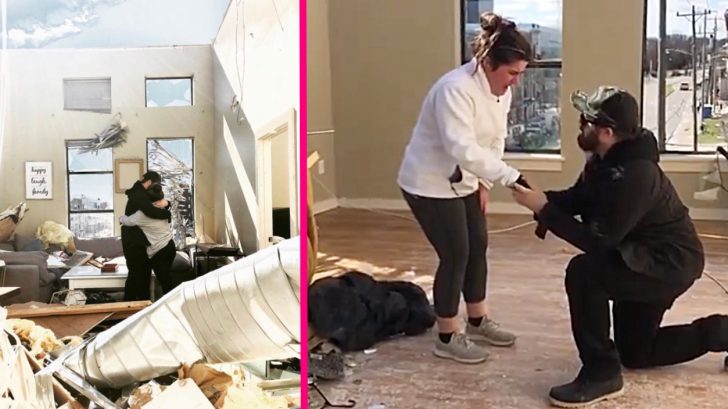 Caitlin Parson and the love of her life, Buster Hughes were in their dream home in Germantown, Tennessee when a powerful E-4 tornado came slamming through the city leaving nothing but death and destruction in its path.

Update on Cait & Buster: we were able to get into their apartment for a couple of hours today to see if anything was salvageable, we were able to recover some things which is a miracle… there was an outpour of volunteers to help today, brings tears to my eyes seeing this community come together like this- such a beautiful thing. Please share their @gofundme link (link in my bio) and help get Cait & Buster’s lives back on track. They still do not have a new place to call home, but I think that will be figured out shortly. Cait’s car is drivable but needs a full paint job, mirror and back window. Buster’s truck is gone. They’re getting through this day by day and feel very grateful for the love and support from everyone. There was even a comic relief moment when Cait went ham on her guitar today lol. Let’s keep this Gofundme going for them! 💪🏻 #Nashville #NashvilleStrong

Hearing the tornado coming, Buster woke Caitlin up around midnight and rushed her to the bathroom because it was the safest place in the house to be. They both hunkered down in the bathtub just moments before the tornado ripped the roof off of their home and began sucking out everything around them. They say it was a miracle that they didn’t die and were really lost for words of what just happened.

Caitlin called her close friend Morgan Myles who drove out to the couple’s home at 2:30am and picked them up to bring them to Morgan’s house in Hendersonville. They spent the night there and the next day drove back to assess the damages. Unfortunately, the home they lived in for more than a decade was absolutely wrecked.

As they rummaged through the mess they were able to find a few of their personal belongings, however, much of their stuff had been sucked through the roof and was now scattered across the county. With the home in this condition, they knew they were going to have to find a new place to live.

Morgan turned her camera on to record Buster who was with Caitlyn still in tears because he wanted to say a few words about the whole experience. He thanked everyone who has helped them through this terrible time and who donated funds to them via their GoFundMe page. Most importantly, Buster knew how much Caitlyn loved the home and he didn’t want her last memory of it to be a bad one so he said to the camera:

“The second thing I wanted to do, especially after all this. I don’t want to lose this girl.” He grabs Caitlyn’s hand. She looks at him super confused saying, “What.” Then Buster drops to one knee as he says, “Caitlyn, baby, I don’t want to lose you. I want to protect you for the rest of my life. Okay, I’m gonna be there for you for the rest of your life to protect you, as long as you’ll be my wife.”

Watch That Beautiful Moment Below

It has been such an emotional week, it’s truly hard to describe what these two have had to go through… This morning Cait was worried about having to say her last goodbye to this place that she called home for over a decade. Buster, knowing her so well said- “I don’t want our last memory in this home to be a bad one.” Buster, words can’t describe how proud and forever grateful I am to you for being a hero that night. I guess when y’all are in a spat you can say “remember that time I saved you’re life?” Lol! I knew any time now y’all would be engaged after dating for 6 years and it’s obviously y’all have been soulmates since you were friends in high school. Even before the storm you have had your life challenges, but this proves how deep your love goes. Your love inspires me and so many others. I love you both so much. I know there are so many beautiful silver linings amongst this rubble of the tornado, including this engagement. Thank you for letting me be apart of your special moment- sorry if I cried like a little baby… I’m just so happy for you two. Love weathers many storms.

Caitlyn loses it. She burst into tears and nods her head, “yes,” as the couple brings it in for a big hug. It was a beautiful moment that even made Morgan cry as she was filming the love the two had for each other. Caitlyn and Buster later posted the video to their Facebook and wrote in the caption how grateful they were to their family, friends and the kind strangers who pitched in to helped them.

They said they have read every comment, text, and direct message sent to them, even if they haven’t had time to respond back to it yet. Since posting their video, it has been shared by many people who loved watching them turn this tragedy into something positive. Witnessing a moment like this really puts life into perspective and makes you want to focus on what’s most important life, which is spending time with loved ones.

If you’d like to help Caitlyn and Buster you can donate to their GoFundMe page here.

More Video Footage Of Their Home Below

I almost lost two of my best friends last night, but it wasn’t their time to go- thank god. I got the scariest call at…