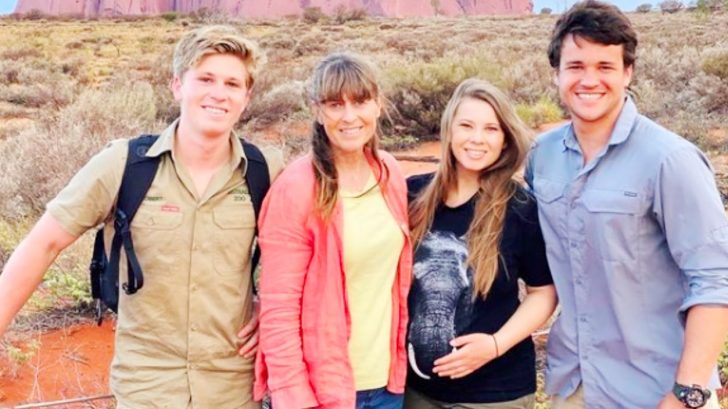 Bindi Irwin and her husband Chandler Powell are anxiously awaiting the arrival of their first child. The couple has kept their followers updated on Bindi’s pregnancy since they shared the news in August.

Since then, they announced they’re having a daughter. They also shared a photo of their baby girl’s nursery, which fittingly has a nature theme.

But one detail the couple never shared with the world was Bindi’s due date. Based on Bindi and Chandler’s recent updates, fans figured she must be due soon, since she’s now in her third trimester.

In fact, Bindi is so far along in her pregnancy by now that she can no longer button her khaki shirt she wears while working at Australia Zoo. So she borrows Chandler’s shirts now!

From Bindi and Chandler’s posts, it’s obvious their baby girl is due to arrive soon. And now, thanks to Bindi’s mom, we have a better idea of exactly how soon.

Bindi’s mom, Terri, was a guest on the Australian TV Program Sunrise on Tuesday (February 9). During her appearance, she revealed that Bindi’s due date is fast-approaching.

“She is due next month,” Terri said. She said Bindi’s now at that stage of her pregnancy “where you really miss being able to see your shoes.”

Bindi’s brother, Robert, was with Terri during the interview. In a hilarious moment, he commented that his sister is “massive” before realizing his mistake.

Tune in to the video below to watch Terri and Robert talk more about Bindi’s pregnancy. They also tell the story of how she and Chandler told them they were expecting.

We wish Bindi and Chandler the best as they prepare to become new parents!

Here's the hilarious moment wildlife warrior @RobertIrwin copped a punch on the arm from mum @TerriIrwin after making a cheeky comment about his sister's pregnancy 😆 pic.twitter.com/NnFdcojZ0r