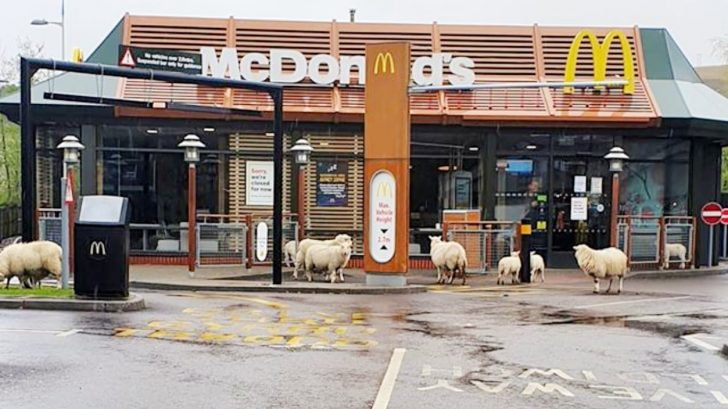 On March 23, McDonald’s closed all of its restaurants in the UK and Ireland because it was becoming too challenging for the restaurants maintain proper social distancing in the midst of the COVID-19 pandemic.

“We have not taken this decision lightly and know that our restaurants have been playing an important role in the community providing hundreds of thousands of free drinks to frontline health,” Paul Pomroy, CEO of McDonald’s U.K and Ireland, said in a statement quoted by Nation’s Restaurant News.

“We feel now is the time to make this decision to temporarily close,” Pomroy added.

While those living in the U.S. are still able to visit their local McDonald’s to pick up a burger and fries, citizens of the UK and Ireland have now gone nearly a month without making a visit to the fast food giant.

Even though it’s closed right now, one McDonald’s restaurant in Wales recently had some visitors. And no, these visitors weren’t people ignoring social distancing guidelines…they were a bunch of sheep!

Andrew Thomas told itv he was shopping at Aldi to get groceries for his mother when he looked at the closed McDonald’s next door. He was amazed to see a whole flock of sheep gathered at the abandoned restaurant.

“There are aways sheep wandering the streets of Ebbw Vale where they come down off common but [I had] never seen them in McDonald’s before,” Thomas said.

Thomas took a quick picture of the sheep on his way out of Aldi. He posted the photo on Facebook, captioning it, “Even the sheep in Ebbw Vale are having McDonald’s withdrawals.”

Even the sheep in Ebbw Vale are having McDonald's withdrawals ???#sorrystoreisclosed#mcdonalds

Thomas couldn’t help but laugh at the sight of the sheep invading the drive-thru of the abandoned restaurant. He included the hashtag “#sorrystoreisclosed” as a gentle way of breaking the news to the sheep that they’d be unable to get inside.

The animals in Wales have seemingly been loving the isolated cities as people have been in lockdown during the pandemic. Weeks ago, a video went viral of a herd of goats roaming through the streets in Llandudno, North Wales.

Check out the video of the goats frolicking through the deserted Welsh town below.

Also, the FDA has found “No evidence” of coronavirus being spread through food or food packaging such as fast food wrappers. But the FDA does say people can take extra precautions by wiping “down product packaging and allow it to air dry.”

Dr. Jeffery VanWingen in Grand Rapids, Michigan, has uploaded a couple videos advising people on how to sanitize their groceries and takeout food, such as pizzas and fast food items. Watch his most recently updated video below.