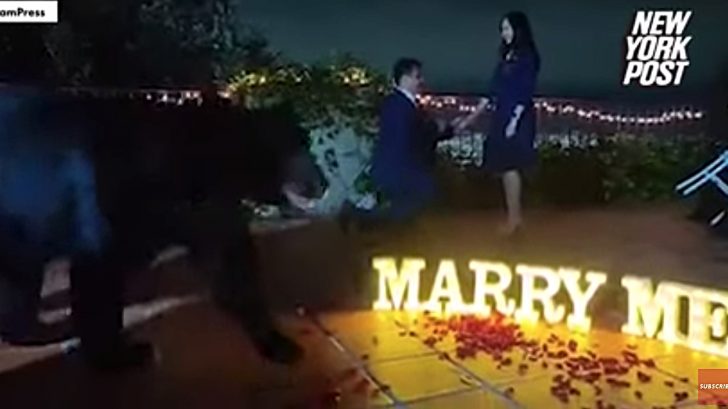 Ricardo Morales was down on one knee proposing to his future wife Cecilia Canabal when a wild bear came walking in front of the camera rudely interrupting the elaborate scene he prepared.

The interruption happened at the Chipinque Ecological Park in Cerro de Chipinque, Nuevo Leon State, Mexico last week and, fortunately, no one was reported harmed during the incident.

“The incident took place just after the ‘yes’ when I was going to put the ring on her finger,” Morales said, according to the New York Post. “That’s when we heard the waiters/gardeners tell us ‘don’t be afraid.’”

With rose petals and light-up letters that read “marry me,” the couple stood extremely still putting their moment on pause as the giant bear meandered its way through.

“We told each other ‘don’t move,’ which is why we’re static in the video when the bear passed. It then climbed over a wall and went into a garden,” Morales continued explaining.

The couple stayed still as the bear slowly walked past and after that, they continued their wedding proposal.

According to New York Post, which reposted the video on its YouTube channel, the original video received more than 340,000 views before the news outlet reshared it.

One person jokingly commented on the original video saying, “Wasn’t the bear wearing the ring?”

“The couple was surprised to see the one who, fortunately, was just passing through,” commented another.

“What a beautiful memory!” another user chimed in.

“And it will be unforgettable,” someone else agreed.

“That [bear] is great, it’s good that he didn’t pay attention to the people,” another wrote.

“Excuse me, I’m just going for a snack,” someone else jokingly said.

Watch The Bear Interrupt The Proposal Below