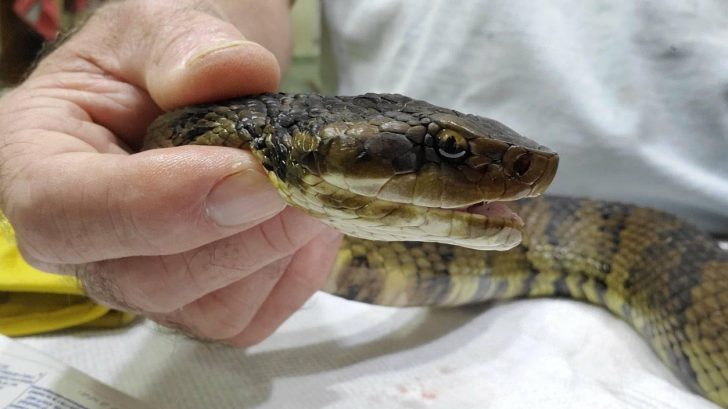 Hatteras Island Wildlife Rehabilitation shared three pictures on Facebook of a cottonmouth water moccasin and a few creatures she vomited on to the operating table.

Hatteras Island Wildlife Rehabilitation is an all-volunteer organization dedicated to the treatment and care of the ill and injured wildlife on Hatters Island, which is located off the North Carolina coast.

The goal of the rehabilitation center is to restore animals to good health, then release them back into the wild. They shared that they found this specific water moccasin stuck in a thorn bush and rescued her. She had several wounds from the thorns so they took her back to the center to doctor her up.

“She had multiple lacerations. They were cleaned and closed and she did well.” Hatteras Island Wildlife Rehabilitation wrote on Facebook.

They put her under anesthesia while they cleaned and applied medicine to her injuries. When they did, she began to throw up all the critters she had eaten before she got caught in the bush. The center expressed how interesting it was to see what she had eaten.

The center stated, “During anesthesia though, she vomited her stomach contents. It may seem gross to some, but I found it very interesting to see what she had eaten. The last photo on the black rubber mat was her meal.”

View What The Water Moccasin Had Eaten Below