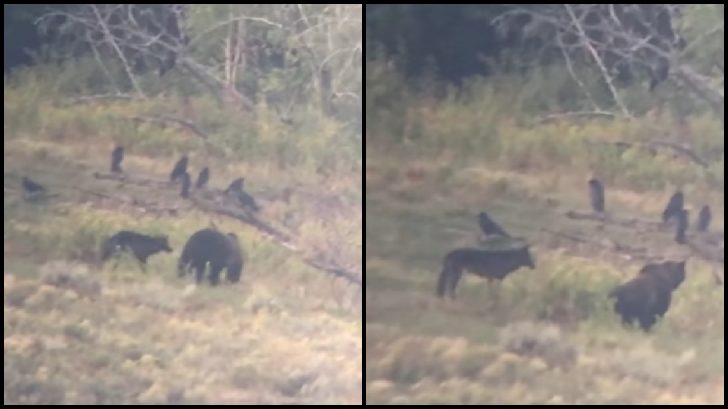 A recent tourist of Yellowstone National Park captured a rare moment that few park visitors get to witness.

Visitors to Yellowstone National Park make the trip not just for the scenery and the park’s infamous geysers, but also for the wildlife. Bighorn sheep, elk, buffalo, elk, wolves, moose and more can be found in America’s first national park. But, rarely do spectators have the opportunity to witness interaction between two different species.

Gary Gaston was traveling through Yellowstone recently when he witnessed an interaction between a grizzly bear and a wolf. In a moment of playfulness, a wolf sneaks up behind a large grizzly and bites it on the rear. The bear jumps slightly then goes about his business. The wolf continues to “play” with the bear, biting it twice more on the backside.

According Doug Smith, the leader of the Yellowstone Wolf Project, wolves and bears often interact, though it isn’t often seen by visitors.

“More grizzly bears are showing up near wolf dens, and grizzly bears are taking away more wolf kills,” Smith says grizzlies are often attracted to wolf dens because of the stinky aroma left behind when adult wolves bring kills back for their young.

“The grizzlies are more powerful, but the wolves are quicker and out-number the bear,” says Smith.

See the fascinating video captured by Gary Gaston below.