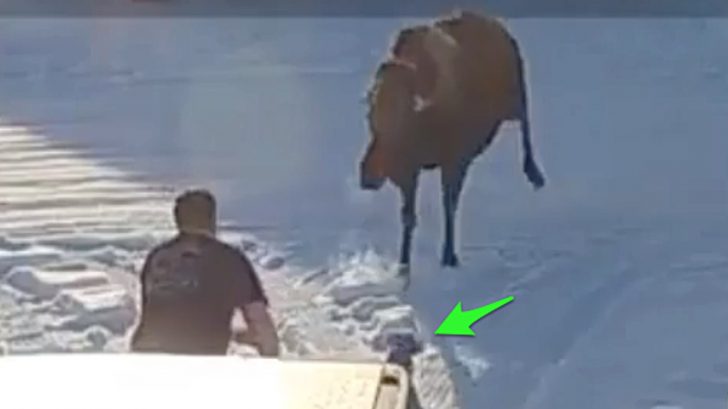 Biologist Tony Hollis spoke to Outdoor Life last week and said he is aware of at least 10 incidents where people have been attacked by moose recently in Alaska.

“About half the people didn’t even see it coming,” Tony said. “They just walked out the door or were not paying attention, and were attacked from behind.”

Wildlife officials said that moose become grouchy around March and April when the snow gets deeper, the food is harder to find, and there are hungry predators hunting them down non-stop.

Many moose succumb to the elements, however, others refuse to let it happen, and to make their journey easier, they walk on roads and trails. They are already so worn down due to the elements so when they meet people they tend to be very aggressive.

Just three weeks ago, a musher ran into a bull moose that repeatedly stomped a team of dogs, sending some of them to the veterinarian in critical condition.

Another video taken from last week showed a cow moose charging a man standing in his own driveway. The man was not alone though, he was with his brave wiener dog that fearlessly leaped towards the moose causing it to divert her trampling away from the man.

If the dog had not done that, the man could have surely suffered a knock to the ground or have been trampled, or pinned against his own vehicle.

Another video recently showed a couple who was visiting Alaska and were on a dogsled tour when they ran into a cow moose standing with her calf in the middle of the trail.

The cow charged right for the team and stomped and kicked at the dogs and riders, and then ran on past them. Fortunately, she did not stop to continue the attack and kept on running.

Tony Hollis said that most of the attacks don’t even make it to the local news, much less go national or international. He said though that for everyone involved in the two recent attacks caught on video, no dogs or humans were injured.