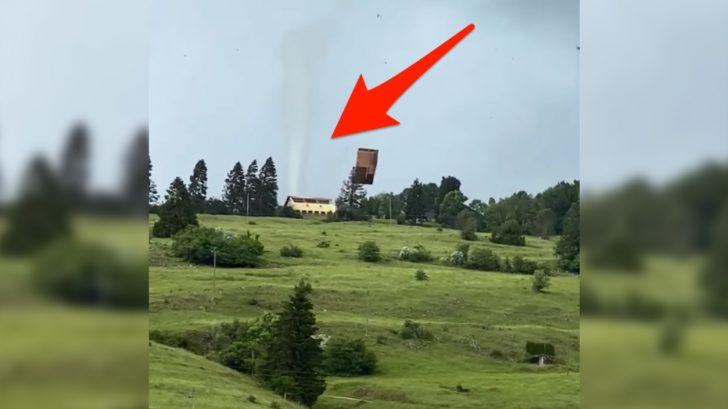 Video footage taken by a lady in France has recently surfaced on YouTube and it shows the jaw-dropping moment a tornado shredded through a barn.

The tornado hit the city of Verrieres De Joux on Tuesday, which is very close to the Swill border. The lady filming was standing far away from the tornado but what she captured on film made her gasp for air.

The video shows a powerful twister appearing from behind a barn that’s positioned at the top of a grassy hill. Within moments, the tornado collides with the barn which was no match for Mother Nature.

The tornado easily ripped the entire roof off the barn sending it flying into the air and then shredded it into pieces. All the hay and grass feed for the farm animals that was stored inside the barn went up with the roof and scattered all around a nearby field.

Some debris flew thousands of feet away from its original place. French authorities said no one was hurt during the storm, however, many cars and homes were battered in the region by the tornado. There were also reports of tennis ball-sized hailstones damaging residents’ properties as well.