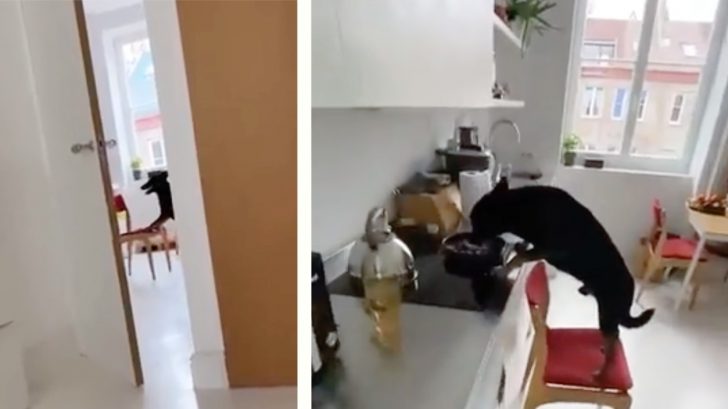 Sander from the Netherlands shared a video of the adorable moment his pet was caught on camera stealing food off the kitchen counter.

Sander shared the video on Twitter showing the smart dog sliding one of the dining table’s chairs across the floor towards the kitchen counter.

“When you leave your dog alone for a mintute..” Sander wrote on Twitter.

The dog was standing on its back legs with its front paws on the chair.

Slowly, but surely, the pup pushed and lined the chair up perfectly next to the counter so that it could jump up and continue the mission.

The dog owner was secretly filming the culprit in action from another room through a door and moved the camera angle view of the dog from that door to another door.

As he got closer to his pet to film and confront his bad behavior, the dog was already standing in the chair with its paws on the counter eating directly out of a cooking pan that was full of food.

A commenter on the post wrote, “This reminds me of our levitating beagle as she could reach food left on the kitchen counter… Once eating an entire roast chicken bones and all. She spent two nights at the vet.”

After Sander shared the video to Twitter, within just a few days it collected millions of views.

When you leave your dog alone for a minute.. pic.twitter.com/OLFvT0TF20