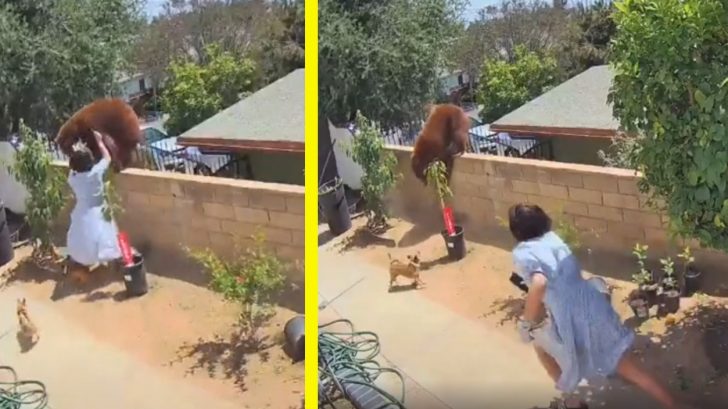 A viral video has struck the internet and captured the moment a woman literally shoved a mother brown bear off the cement garden wall as it began swiping at her dogs.

Posted to TikTok by user @bakedlikepie, the video comes from some home security footage of the user’s cousin, Hailey, who is seen running barefoot outdoors after her herd of small dogs encounter a momma bear and her cub along the garden wall.

The footage shows the two bears sauntering across the wall between two houses in what appears to be a developed residential neighborhood.

In a flash, a herd of medium-to-small dogs appears and they begin barking and snapping at the intruding bear. The cub instantly gets bumped off the wall by the mother bear and she starts taking swipes at some of the dogs.

When the dogs owner, Hailey, sees what’s going on, she busts through the door and beelines it straight for the bear without a second thought.

She runs straight up to the bear and with both hands just shoves the giant mammal off the wall, quickly takes a count of the dogs, picks the final straggler up, and runs in after them.

In a follow-up video, this is what she had to say about it:

“I was in the mountains, so this was actually really normal and in summers [bears] always come down….”

“They start barking – our dogs – and I thought they were just barking at a dog because they always bark at dogs or squirrels or whatever because they’re dumb. But I go to tell them to stop, and when I went over there to see what they’re barking at, I’m like, ‘That’s a funny-looking dog!'”

“And by the time I get there, the bear is literally picking up one of my dogs.”

“I go over to the bear, I look it in the eyes and the first thing I think to do is push it… Push a bear, push an apex predator, man. And to be honest, I don’t think I pushed her that hard, I just pushed her enough to lose her balance.

“So she drops my dog and I run out of there! I grabbed my other dog.”

See this crazy video below. It definitely will get your blood pumping!

My cousin Hailey yeeted a bear off her fence today and saved her dogs. How was your Memorial Day?! (WTF?!) ##ohno ##badass ##brave ##fight ##bear