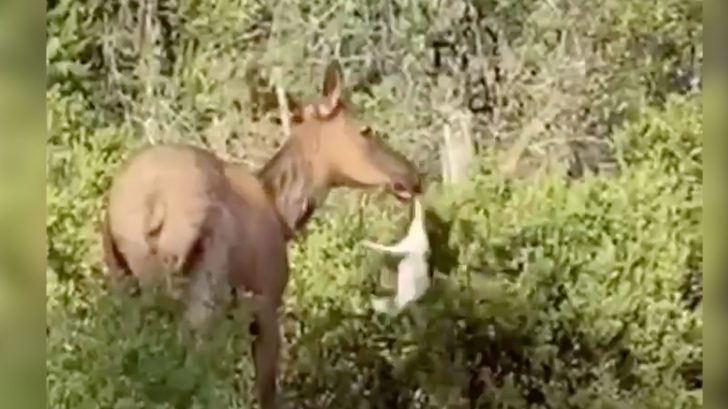 Generally speaking, the elk is an herbivore primarily feeding on grasses, shrubs, twigs, and even tree bark if there’s a lack of vegetation. Occasionally, however, they are known to snack on meat for different reasons.

Such was the case in a recent video posted to Instagram by Nature Is Metal that shows a female elk chewing on a rabbit.

The elk has the rabbit’s foot in its mouth while it shakes its head around. Since the elk’s teeth are meant for chewing up grass and plants, the elk uses this strategy to break down her food. She swings it through the air and manages to snaps off a small section of the rabbit’s back leg.

The video is somewhat eerie but also reminds us that nature is wild and beautiful.

Elk occasionally supplement with meat in order to take in minerals that help grow healthy coats and produce nutritious milk for their calves. It doesn’t happen too often but when it does, it’s interesting.

Such is the case in the video below which shows a cow elk chasing a couple of Canadian geese and a group of goslings before eventually scooping up one of the little ones and chewing on it.