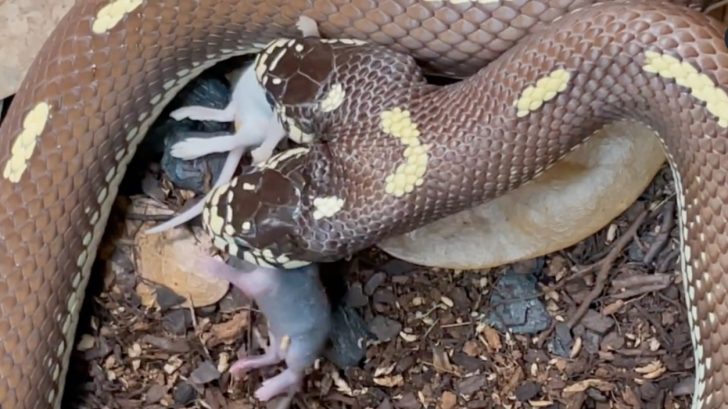 Brian Barczyk shared an epic video on Instagram showing a two-headed snake that his friend sold him gobbling down two mice at the same time.

The highly rare reptile’s name is Ben and Jerry and it’s a full-grown California Kingsnake. It is owned by Brian who is a world traveler passionate about animals and he creates daily vlogs to show off the creatures he runs into during his journies.

Brian Barczyk wrote on Instagram, “Two headed Ben and Jerry eating. Miss all my snakes and animals, but we will be home soon. Having a blast on this adventure and have so much more to share!!”

In the video he shared, it shows both heads of the snake with mouses in their mouths as they both race to chomp down their meal. The video’s short and sweet, but it’s certainly remarkable to see a two-headed snake eat.

Normally, two-headed snakes do not make it past a few months from birth. However, if they manage to make it to be an adult, they will usually live long, healthy, and happy lives like Ben and Jerry have been able to do.

The reason why the snake has two heads in the first place is because of a deformity called bicephaly, which is known to affect one out of every ten thousand snakes.

In the case of Ben and Jerry, when they were a fertilized egg they did not fully split, thus developing into conjoined twins. Bicephaly can happen to any animal species of animal but it’s most commonly found in snakes.

Brian told IFLScience, “They do share a stomach and their tracheae is attached about an inch down from their heads.”

He said that he’s been wanting to own a two-headed snake his whole life but wasn’t able to get ahold of one until his friend showed him Ben and Jerry.

Today, Brian allows the snake to live in an enclosure at the Reptarium, a reptile zoo in Michigan where Brian regularly gives tours to visitors. Brian also owns BHB Reptiles, a company that sells reptiles and has been around since 1989. Now, let’s get into the video!

Watch Footage Of Two-Headed Snake Below

WARNING: VIDEO MAY NOT BE SUITABLE FOR ALL VIEWERS