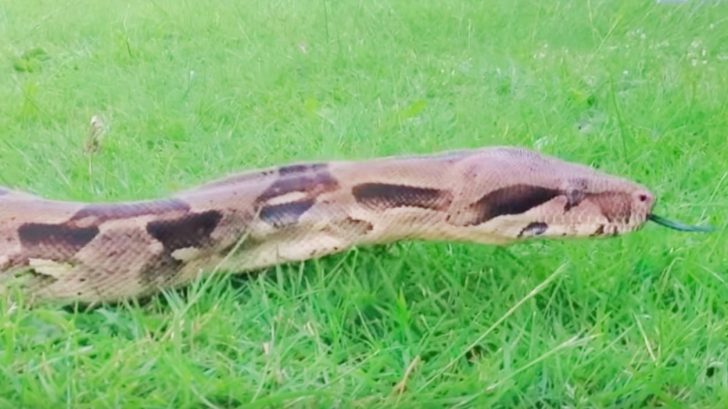 Residents in one neighborhood are being warned after a huge, non-native snake escaped from its home where it was kept as a pet. And it’s been missing for days.

According to StokeonTrentLive, the snake, which is a boa constrictor, escaped over the weekend and was last seen on Sunday (July 14). The publication states that the boa somehow managed to slither out of its owner’s home on Melrose Avenue in Staffordshire, England, and that it was last seen in the Highfields area.

A spokesperson for the Royal Society for the Prevention of Cruelty to Animals, or RSPCA, was quoted by the publication issuing a warning to families who live in the area where the snake escaped.

“If anyone comes across a snake they believe is non-native the RSPCA’s advice is to keep a safe distance, monitor the snake and call the charity’s helpline on 0300 1234 999,” the spokesperson said.

If this escapee snake happens to slither by you, there’s no doubt you’ll instantly be able to recognize it. That’s because it’s estimated to be six feet long…that’s huge!

As for how the snake was able to break free, the RSPCA spokesperson said that snakes are actually pretty talented escape artists. So the best way to keep them from getting loose is to make sure they’re kept in a proper enclosure.

“We would always recommend owners invest in an enclosure suitable for the particular species and that the enclosure is kept secure (and locked if necessary) when unattended,” the spokesperson said.

We think it’s safe to say that if this boa is ever found, it will be well-secured to keep future escapes from happening!

There have been quite a few stories about escapee snakes in the news as of late. One sneaky serpent, dubbed The Tuscaloosa Python, escaped nearly a month ago and still hasn’t been found.

And if you thought the idea of an escapee six-foot snake was terrifying, get a load of this. The Tuscaloosa Python is 15 feet long…yikes!

You can learn more about that evasive snake’s escape by tuning in to the video below.

Hopefully the Staffordshire boa and The Tuscaloosa Python are both found soon, for their safety and for the safety of the residents in their respective areas.