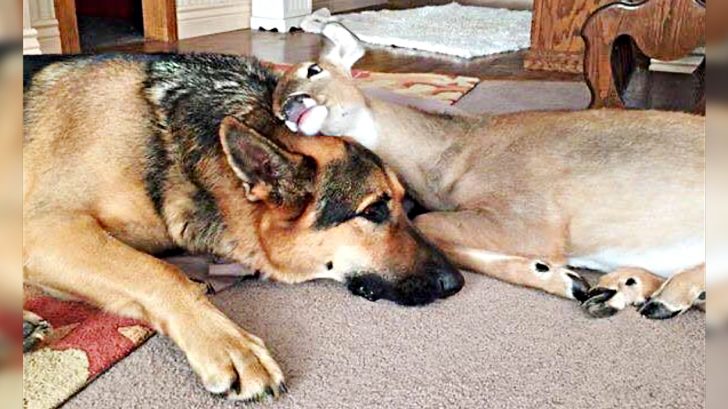 Sarge the German Shepard has a very sweet and nurturing side to him. He loves taking care of animals, especially baby deer, also known as fawns.

Known for their commitment to their families and their loyalty to those they love, German shepherds are heralded for their intelligence and devotion to others. These smart dogs are known to love their work and excel as police, military, therapy, and service dogs.

Sarge’s owners work to care for injured animals and nurse them back to health before returning them to thrive in their natural habitat. Forest surrounds Sarge’s home, and they come in contact with many types of animals, and he makes sure to do his part in mending them back to health. He provides love, affection, and comfort for each of the animals, so they know they are not alone.

Sarge has a knack for snuggling animals and making them feel right at home. A stark contrast to the image some people have of German shepherds as ferocious police dogs, he loves to share his food, water, and toys with the animals. Such a good boy.

Check out the WeRateDogs Tweet about Sarge and watch the sweet video of another German Shepard being sweet with a baby deer below.

This is Sarge. He helps save injured and orphaned wildlife in his area. I’m told he loves all animals, but gets the most attached to fawns. 14/10 good boy Sarge pic.twitter.com/Zlv65hDxxE