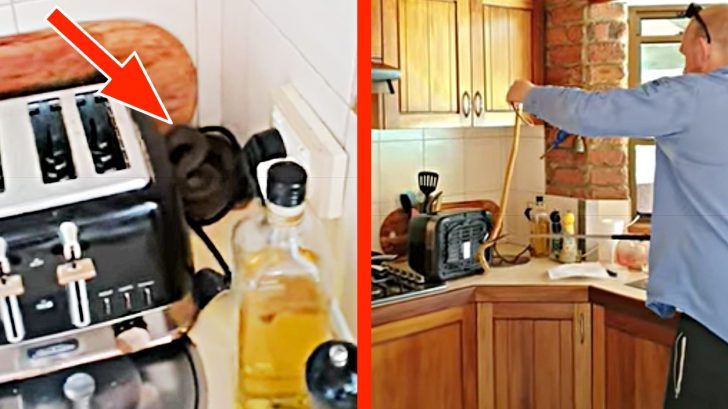 Families that live in areas inhabited with venomous snakes are often familiar with the old saying that venomous snakes can’t climb – but this story puts that rumor to rest.

In Rosemont, Australia, a family called a snake catcher named Stuart McKenzie with a complaint of a snake loose in their home. After an hour of searching, the snake was nowhere to be found. Both the snake catcher and the family thought that it had found its way out, or perhaps the family members had mistaken something else in the home for a slithery reptile.

A week later, the family called McKenzie again with the same complaint, but this time they knew exactly where the snake was. McKenzie was shocked when he arrived to see the snake comfortably curled up on the family’s kitchen counter, hiding behind their toaster!

When discussing the capture, McKenzie said, “People say, ’No, venomous snakes can’t climb. Well, I’ll tell you what they certainly can. And that just sort of proves it.”

Luckily, the snake was captured and safely removed from the home.

Wildlife experts urge people who find venomous snakes in their home to take the same course of action as this family – calling in an expert to remove it safely.

Watch the video of the snake being captured below.

EASTERN BROWN SNAKE ON KITCHEN BENCH! ?Here is the video from yesterdays callout where a Rosemount family had an…