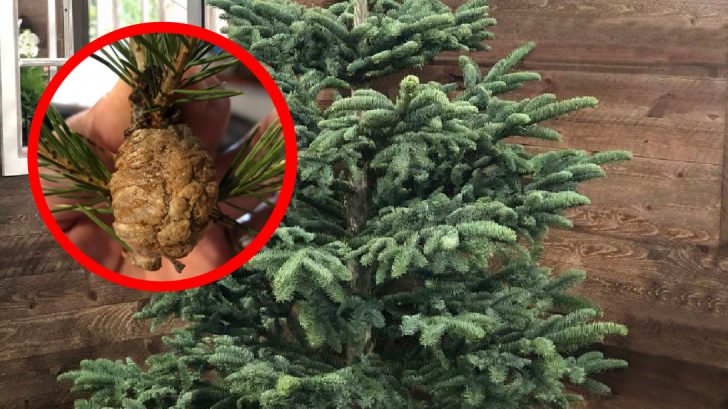 Nothing quite gets you in the Christmas spirit like the smell of a fresh-cut Christmas tree. But, if you choose to bring a real tree into your home this holiday season, you may want to give it a thorough search first.

In a social media photo posted by Daniel Reed, people are warned about “walnut-sized” masses that are often found attached to the branches of real Christmas trees. While they’re often mistaken for pine cones, the masses are in fact made up some something much more cringy.

According to Reed, one mass contains roughly 200 baby insects…praying mantis eggs, to be exact. They’re not dangerous, but could certainly damper your Christmas spirit if they were to hatch inside your home.

Instead, Reed suggests that you clip the branch and put it in your garden where they can hatch in the spring. If left indoors, the warmth will cause them to hatch early, though they wouldn’t live long due to lack of a food source.

People responded to Reed’s post with their own horror stories about finding the masses in their trees. Several readers shared that their walls were covered in tiny praying mantis after having them hatch in their home. Others found the disturbing news as a great reason to stick with a fake tree during the holidays.

If hundreds of tiny baby praying mantis swarming your home isn’t disturbing enough, the Pennsylvania Department of Agriculture revealed that any number of critters could be lurking in your tree’s branches. Aphids, bark beetles, mites, bark lice and spiders are just a few of the unwanted guests you could find seeking solace behind the tinsel.

“Some of these may remain on the tree into winter and could become active after being exposed to the warm temperatures inside the home,” the department said.

So, be sure to give your tree a thorough inspection before allowing it into your home. Check out the post below to see a picture of the mass you need to be watching for.