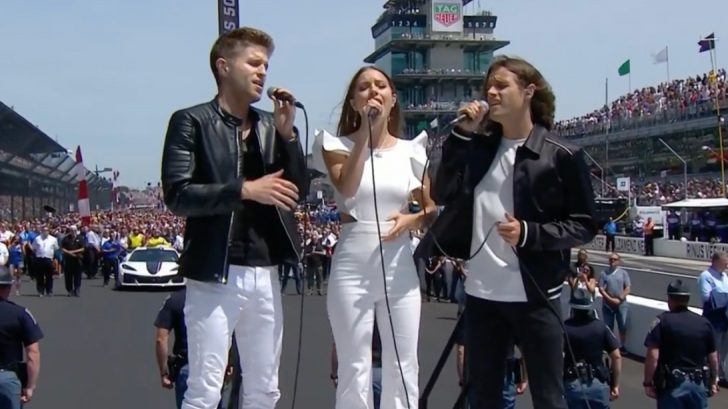 The Voice Season 21 winners Girl Named Tom took the stage prior to Sunday’s Indianapolis 500 to take part in one of the NASCAR race’s most beloved traditions….the singing of “America the Beautiful.”

The sibling trio, consisting of Caleb, Joshua and Bekah Leichty were tapped to sing the patriotic tune prior to the iconic race due to them being Indiana natives.

“Caleb, Joshua and Bekah captured the attention of America during their winning run on ‘The Voice,’ and their performance will be one of the highlights of pre-race ceremonies,” said IMS President Doug Boles in a statement. “We welcome them back home again to Indiana along with the huge crowd on Race Day and live national TV audience on NBC and eagerly look forward to their rendition of this beautiful tribute to our great nation.”

The crowd cheered as the trio began to sing a stunning a cappella rendition of “America the Beautiful.” Their tight sibling harmonies were a reminder of why they were crowned The Voice winners.

The performance of the patriotic song prior to the Indianapolis 500 has long been considered an honor. Fellow Indiana native and The Brady Bunch star Florence Henderson had the honor for six years before taking over as vocalist for “God Bless America” in 2003, a tradition she kept until her death in 2016.

Other notable artists who have been honored to sing either “The Star-Spangled Banner,” “America the Beautiful” or “God Bless America” prior to the Indy 500 include The Voice winner Chevel Shepherd, Martina McBride, Danielle Bradbery and the Indiana National Guard Trio.

Hear Girl Named Tom sing “America the Beautiful” in the video below.

Winner of Season 21 of @NBCTheVoice, @GirlNamedTom, perform “America The Beautiful” ahead of the 106th #Indy500. pic.twitter.com/EgGluCLIli