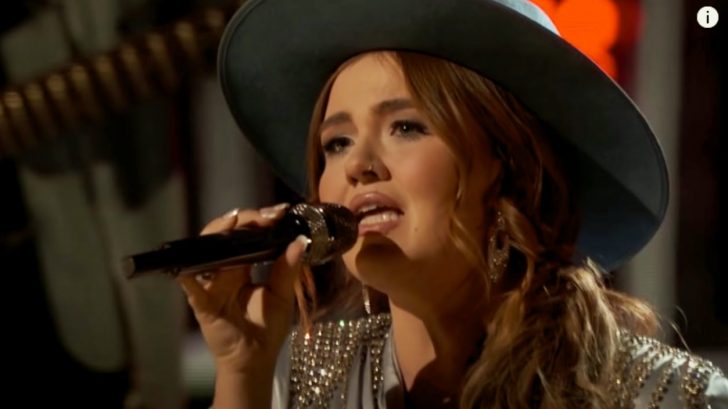 Usually, a Voice contestant and their coach work together to pick a song for their next performance. But the Top 11 contestants of Season 21 lost that element of control. Instead, that power was given to viewers.

During “Fan Week,” Voice viewers selected the songs the Top 11 contestants sang. When it came to Team Blake country singer Lana Scott, the viewers wanted her to cover one of modern country music’s biggest hits…”I Hope” by Gabby Barrett.

“I Hope” was a #1 hit on both of Billboard‘s country charts. It was later nominated for Single of the Year at the 2020 CMA Awards.

Anyone who has heard “I Hope” can tell it is a challenging song to perform. But the Voice viewers knew what they were doing when they picked the song for Scott. She was aware of the challenge it posed, and was ready to face it.

The few clips we saw of Scott’s rehearsals made it clear she was going to blow everyone away with her performance of “I Hope.” And that’s exactly what she did.

Scott’s soaring performance impressed all of the Voice coaches. Ariana Grande has some especially kind words to say about the 28-year-old singer:

“That was so incredible. I feel like you’ve never sounded better. You’ve never felt more in your own. You’re so incredible,” Grande said. “Every week you bring the best energy and such consistent vocals and I don’t know I feel like there’s such an incredible lane for you. You’re the perfectly packaged, ready to go, country pop star. Here you are, you’re just done.”

Scott also earned a lot of praise from her coach, Blake Shelton. He said her performance of “I Hope” was her “breakout moment” in the competition:

“Every season, there are these conversations that we have at some point of the show about an artist having their breakout moment, some never have it,” Shelton said. “You just completely changed the landscape of this entire competition. That was by far your best performance that you’ve had. What a great time to have a breakout moment on this show.”

Tune in to the video below to watch Scott’s “breakout” performance on The Voice. This girl is going places, that’s for sure!