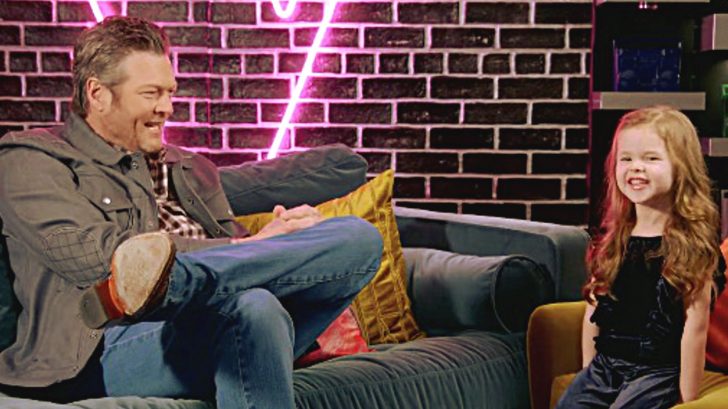 Viral sensation Claire Ryann Crosby has won over the hearts of millions with her sweet singing voice and adorable personality. Along with her father, Dave, the little girl became an internet superstar once their Disney duets took off.

After achieving such great fame online, Dave decided to try his hand at television. He auditioned for The Voice during Season 13, and managed to get three chairs to turn for him. Adam Levine was the lucky coach who got the chance to welcome Dave to his team.

Although Dave was eventually eliminated in the battles, he managed to build an even greater following in his short time on the show.

While Dave was on The Voice a while ago, he still seems to have close ties to the show. For Season 14, his daughter Claire sat down with all of the coaches for what had to be the cutest set of interviews ever.

Interviewing The Coaches Of The Voice

The spunky five-year-old asked all sorts of questions, from asking Kelly Clarkson if she likes animals to asking Alicia Keys how she can be a strong woman. But the first question she had for Blake Shelton was definitely the best.

Claire Ryann Crosby​ interviews the four coaches of The Voice​ for the most adorable interview ever.

Claire interviews the coaches from one of our favorite shows, The Voice! The new season of The Voice just started, you can catch it on NBC Monday and Tuesday nights. It brings back some fun memories for us!

“Is it true that you had long hair at the back of your head in high school?” Claire innocently asked him.

The look on Shelton’s face was priceless as he let out a long groan. He clearly didn’t want to fess up to his mullet days, but knew he couldn’t lie.

“Yes, that’s true,” he finally said. He then tried to defend his past hairstyle choice, saying, “Some day that’s gonna be cool again.” Claire’s response was just a whole bunch of giggles, so we don’t know that she was buying it!

You can see Blake’s much-regretted hairstyle in action when you check out his music video for his first-ever single, “Austin,” below. He’s come a long way since then!