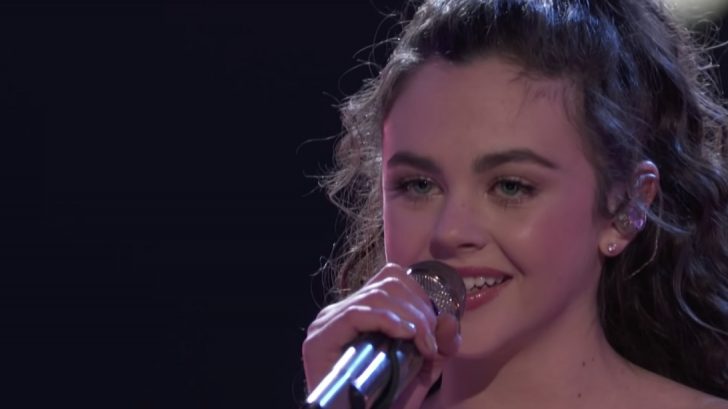 With a voice that belies her 16 years, Chevel Shepherd wowed The Voice judges during the first round of Season 15’s live performances. Many artists falter under the pressure of the live shows, but the talented teen was unshaken as she delivered a stunning rendition of the 1985 Judds’ hit “Grandpa (Tell Me ’bout the Good Old Days).”

Written and released nearly two decades before Shepherd was born, the Judds’ classic has seen a resurgence in popularity in recent years. The nostalgic lyrics are more relatable than ever before and the tune was a perfect fit for Chevel’s voice.

hey y’all! i’m doing a show in Ashland Kentucky April 5th at The Paramount Arts Center!! tix are on sale NOW!!! (link in bio) hope to see all of y’all’s beautiful faces out there! #classiccountry #kentuckyshow #chevelshepherd ?

All eyes had been on Shepherd since her Blind audition aired. The country singer from Farmington, New Mexico, earned a 3-chair turn with her performance of The Band Perry’s “If I Die Young,” and made a shocking decision when she chose Kelly Clarkson as her coach instead of Blake Shelton. The choice was a “dream come true” for Clarkson who had been waiting for just the right country singer to join her team.

“It’s no secret I have been dying to get a female country singer,” Kelly said following Chevel’s Blind audition. “And, you float that line perfectly kind of in the pop world as well. With those breaks in your voice…yes they’re very Dolly Parton but they’re also very Sarah Mclachlan. One main reason why I do want to work with you too after turning around and watching is I was just like you when I was young and you are in your head a lot.”

The decision had paid off for Shepherd who continued to dominate week after week. She won her Battle round with a beautiful performance of George Strait’s “You Look So Good In Love,” and earned her spot in the live shows with a flawless rendition of “Travelin’ Soldier” by the Dixie Chicks.

Chevel ended up taking home the Season 15 crown – a much-deserved win. Watch Chevel Shepherd’s live performance of “Grandpa (Tell Me ’bout the Good Old Days)” in the video below.