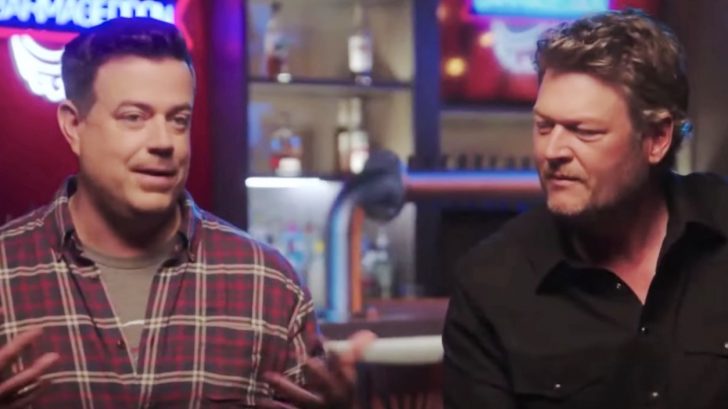 Over the last 10+ year on the singing competition show The Voice, there have been two constants: Blake Shelton and host Carson Daly.

In 2021, The Voice celebrated Shelton’s 10-year anniversary, but it really was Daly’s as well!

Since the country singer has been around for so long, we figured he’d stay on the show forever! But, sadly that is not the case. On October 11, he was announced as a coach for the 2023 season alongside Kelly Clarkson, Chance The Rapper, and Niall Horan.

But that same day, Shelton announced that after next season, he will be leaving the show.

“I’ve been wrestling with this for a while and I’ve decided that it’s time for me to step away from The Voice after next season,” he wrote. “This show has changed my life in every way for the better and it will always feel like home to me.”

His wife Gwen Stefani, who he met on the show in 2014, commented on his announcement post and said, “I am so proud of you and so blessed to have found u. your talent brings joy to the hearts of so many people and i am so lucky to be part of ur life’s journey.”

John Legend spoke about Shelton’s exit and said, “Well, you know, he’s been doing the show for 22 seasons, it’ll be 23 when he’s done, and you can’t do something forever. We’re gonna miss him though. He’s been the heart and soul and anchor of the show for a long time, and he’s a friend of mine, and I really enjoy working with him.”

“I hate it. He and I, obviously, developed a great friendship at The Voice. I’m bummed, but I get it,” he said. “When we started the show, we had no idea that it would be this successful. We [were] on twice a year; it’s a lot of work. We’re lucky to have had him for so long, because most musicians need to tour.”

He joked, “I don’t know who I’m gonna eat my meals with now. I’m just gonna have to get a cardboard cutout.”

But, this will not be the end of their working relationship, or their friendship!

They are currently working on the show Barmageddon together, which is a show where celebrities come to Blake Shelton’s bar, Ole Red, and play extreme drinking games.

Proving that these two are really great friends, Daly married Shelton and Stefani in 2021!