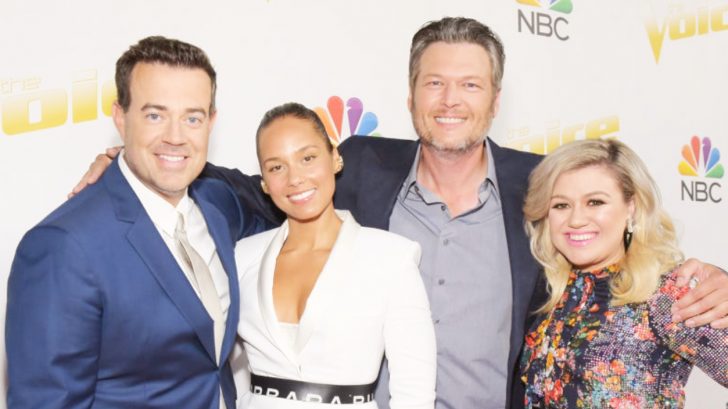 In 18 seasons, The Voice has seen hundreds of different contestants and many different coaches. Nothing on the show ever seems to stay the same…well that is, except for three things.

The three constants that Voice fans had always been able to count on since the show kicked off in 2011 were coaches Adam Levine and Blake Shelton, and host Carson Daly.

While other coaches, advisors, and correspondents have come and gone over the years, Levine, Shelton, and Daly stuck it out for 16 seasons. But Levine quit at the end of Season 16, leaving Shelton and Daly as the only remaining show “veterans.”

As the host, it is Daly’s responsibility to interact with the coaches throughout the duration of the show. In doing so, he’s been able to develop a strong bond and playful rapport with Levine, Shelton, and some of the frequently returning coaches such as Alicia Keys and Gwen Stefani.

Best double date ever last night. Thanks to @siriouslydelicious for flying across the country. Thanks to our favorite couple @blakeshelton @gwenstefani for being so special in our lives. And THANKS troops for allowing us to have the freedom to enjoy such a night! God bless ?? #veteransday #peopleschoiceawards

Carson Confesses Which Coach Is His Favorite

Just as Voice viewers have their favorite coach or coaches, Daly is no exception. He once let it slip on-air which coach is his favorite, and it may not be who you expected!

We’ll give you a hint, it’s one of the coaches from Season 15…

While you would think Daly’s favorite coach would be Levine or Shelton just based on the fact that they were on the show the longest, that’s not the case.

It turns out his favorite coach is none other than Kelly Clarkson!

Daly let the confession slip while welcoming the coaches to the stage during one episode of The Voice. As Daly said the coaches’ names, Clarkson rushed up to him and gave him a big hug, prompting Daly to introduce her as “my favorite, Kelly Clarkson.”

Who's feeling a little nosey? #RedNoseDay

Kelly Rocks In Her Role As Coach

We can’t blame Daly for being such a big fan of Clarkson.

She has rocked as a coach on The Voice, and has three wins so far! One of her champions is Chevel Shepherd, who was only 16 when she won the show.

Based on Shepherd’s performances of country staples such as “Blue,” we always had a feeling her chances to win looked good.

What do y’all think of Daly’s confession? Do you have a favorite coach? It could be anyone from any season. Let us know!