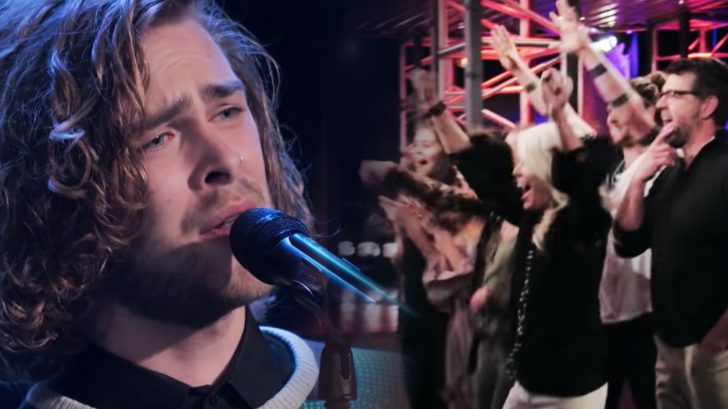 This aspiring singer/songwriter took on a cherished Tim McGraw chart-topper, but it wasn’t until the very last note of his performance that jaws truly dropped!

Appearing on the 15th season of NBC’s hit singing competition, The Voice, Kansas City singer Jake Wells gave his own, magical version of McGraw’s 2006 hit, “When The Stars Go Blue.” First written and released by Ryan Adams, the song has been covered by a lot of different artists, but McGraw’s is one of the most famous.

Wells has been honing his craft for years and even has a band back home in Kansas City who he performs regularly with. Recently, Wells even celebrated a massive accomplishment for a young musician – getting over 1 million streams on music service Spotify!

Beyond covering Tim McGraw for his debut blind audition on The Voice, Wells has also covered other cherished standards like “Hallelujah” and shared them with his fanbase on social media.

I really don't know if I'm allowed to cover this, like, by my own standards I think some songs are sacred, but I also think music is meant to be shared. Hallelujah hits home for me and I feel a genuine connection to this song. #music #livemusic #singing #paino

Stepping out on stage in front of all four coaches, this young singer immediately got attention from Kelly Clarkson with his song choice and soon had each of the coaches singing along or swaying to the music – so viewers immediately thought he’d earn a chair-turn…but nobody was turning around for him.

Soaring through the notes with a pristine falsetto and pitch-perfect sound, Wells truly turned this performance into a breathing work of art!

Inching toward the end of the number, it was a surprise none of the coaches had turned around by that time – especially with the outward enthusiasm you could see in all of them.

At the very last second, and on the very final note of the song, Wells held it for a moment and coach Adam Levine jumped in with a button press that won him the singer for his team!

“I turned around for one reason: you’ve got a lot of talent and I thought ‘this dude is different’ and I love that,” Levine said excitedly. “To not reward that on this show would be the antithesis of what this show is!”

Take a listen and watch Jake Wells’ stunning cover of Tim McGraw’s “When The Stars Go Blue” below! Let us know what you think in the comments.