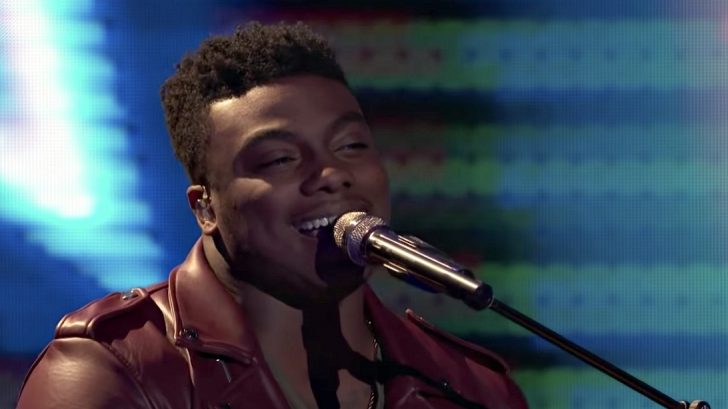 It’s only a few weeks until season 15 of The Voice wraps and the remaining contestants are pulling out all the stops to guarantee themselves a place in the finals. Monday night (November 26), the Top 11 took the stage to perform songs that were chosen for them by viewers. The contestants stepped it up and nailed their performances, making sure tomorrow night’s eliminations will be more heartbreaking than ever.

One of our favorite performances Monday night was from Team Blake’s Kirk Jay. The country singer earned a rare 4-chair turn during his Blind Audition at the beginning of the season. His soulful rendition of Rascal Flatts’ “Bless the Broken Road” had the judges fighting for him and had America intrigued.

Jay ultimately chose to join Team Blake and has stayed true to his “country ’til I die” motto. Week after week he has solidified his reputation as a country singer with song covers such as Brett Young’s “In Case You Didn’t Know” and Lonestar’s “I’m Already There.” But, it was perhaps his most recent cover of Sam Hunt’s “Body Like A Back Road” that convinced us that this guy truly has a future in country music.

“Body Like A Back Road” shattered records after its release in 2017 and has been heavily criticized for its provocative message and lack of traditional country sound. But, Kirk Jay brought his own bluesy, soulful sound to the song and made us feel as though we were hearing it for the first time. The performance began with the Alabama native seated behind a piano. As he began to sing the second verse he made his way to the crowd, showing off some dance moves along the way.

Coach Blake Shelton was thrilled with Kirk’s performance, and praised him for his ability to mash-up the sounds of George Strait and Rascal Flatts. Many viewers agreed with Shelton and took to social media to show their support for Jay.

“Kirk Jay makes me fall in love with country music a little more each performance,” one fan wrote.

Others compared the singer to Darius Rucker and Aaron Neville.

Kirk Jay on #TheVoice is like a young Darius Rucker + Cee Lo ?✨ #artistwatch

@blakeshelton Kirk Jay sounds like Aaron Neville and Nelly rolled into 1 and I love it!??

Watch Kirk Jay’s full performance below and let us know what you think! Does Kirk Jay have what it takes to win it all?