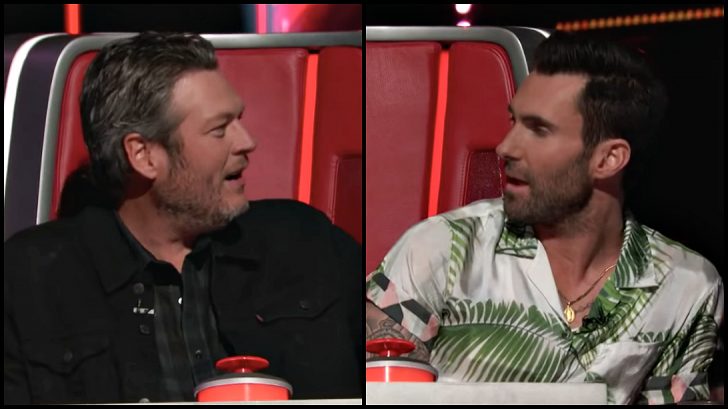 Many things have changed during the sixteen seasons The Voice has been on the air. Numerous coaches have come and gone and the format has been switched up, but one thing definitely has not changed…the friendly rivalry between Blake Shelton and Adam Levine.

Shelton and Levine are the only coaches who have been with the show since the beginning, and their storyline has been nearly as entertaining as the reality singing competition itself. But, a recent comment made by Adam Levine left viewers feeling like he has crossed a line.

For the first time in the show’s history, The Voice introduced the Live Cross Battles this season. In this round, coaches choose one of their proteges to go head-to-head with a member of a competing team. The public gets to vote on which artist from each pairing gets sent home. During Monday night’s Cross Battles, sibling trio The Bundy’s of Team Kelly were pitted against country favorite Andrew Sevener from Team Blake.

Following the battle, the coaches were given an opportunity to give feedback. Blake commented that Andrew “burned the place down with his voice.” When it was coach Adam’s turn, he threw a verbal jab at Blake to which the country singer responded, “I’m sorry. With that haircut I’m not accepting any weird assessments from you today.”

Adam got defensive, and rightfully so, but perhaps took things too far when he turned to the performers on stage and said, “Hey guys. Sorry. I just hate him, that’s all.” The comment was met with silence from the crowd, making for one of the most awkward moments we’ve witness on The Voice.

Fans of the show took to social media to reprimand Levine for his “tasteless” comment about hating Blake.

#TheVoice #AdamLevine comments about #BlakeShelton are tasteless and getting old. They are not funny and need to stop.

@blakeshelton @adamlevine Even little children know better than to call people stupid and say you hate them. When it is lighthearted it’s funny. Lately it has been uncomfortable to watch. @kelly_clarkson Time out needed?

@adamlevine #VoiceResults – I love the show and all of the judges, but you really need to stop being so mean and hateful to Blake, he doesn't treat you that way.

While some fans thought Levine’s comment crossed the line, it’s clear that Blake and Adam are dear friends and that their rivalry from the red chairs is just business.

Watch highlights from Adam and Blake’s years-long rivalry in the video below and let us know what you think. Was Adam’s recent comment just more of the usual? Or, did he take things too far?